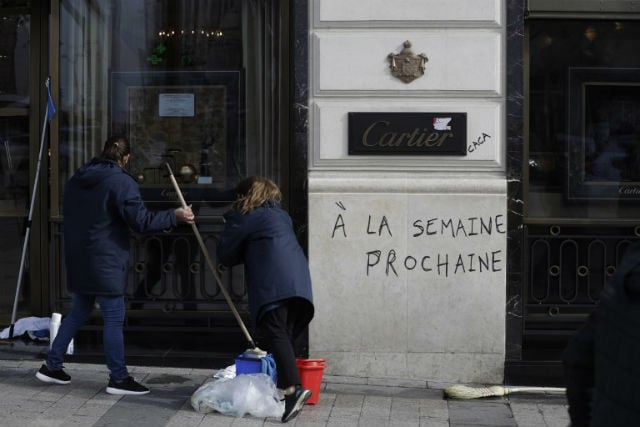 A cleaner tidies up outside the Cartier store on the Champs-Elysées on Sunday. Photo: Geoffroy Van der Hasselt/AFP
Some 80 shops and businesses along the avenue were vandalised on Saturday when the protesters ran amok, with about 20 looted or torched, retailers said. Saturday's demonstrations were characterised by a sharp increase in violence after weeks of dwindling turnout.
It was the 18th consecutive weekend of demonstrations which began in mid-November as a protest against fuel price hikes but then morphed into a potent anti-government movement.
“There was a wave of violence, we're dealing with the aftermath of the chaos. We're trying to reassure all the employees and then there are those who live here, too,” said Jean-Noel Reinhardt, head of the Committée Champs-Elysées, a local association with 180 members, most of them businesses.
He said residents and business owners were pushing for talks with Prime Minister Edouard Philippe “to share our exasperation and explain our complaints”.
“The authorities must put an end to this situation,” he insisted.
READ ALSO:
'Major social and political crisis'
Socialist mayor of Paris Anne Hidalgo said she was waiting for “an explanation” from the government, declaring herself “really angry” at the “unprecedented violence”.
In an interview in the Le Parisien newspaper Hidalgo added “we should be able to master a situation like the one we have just witnessed. “We are in the middle of a major social and political crisis… we can't carry on like this.”
The prestigious Champs-Elysées, known for its shops, cafés and luxury boutiques, has been the focal point for the demonstrations which have often turned violent, sparking running battles between police and protesters.
On Saturday, the police appeared overrun as protesters swarmed the area, vandalising and later setting fire to Fouquet's brasserie, a favourite hangout of the rich and famous for the past century — as well as luxury handbag store Longchamp.
Clothing outlets Hugo Boss, Lacoste and Celio were also damaged, as well as a bank, a chocolatier and several newsstands.
“Enough is enough. And this Saturday went too far!” raged Bernard Stalter, president of CMA France, a national network of chambers of trades and crafts.
Police used tear gas, stun grenades and water cannon to try repel protesters who gathered at the foot of the Arc de Triomphe war memorial, which was sacked by protesters on December 1. But for seven hours they continued to be pelted with paving stones by mostly black-clad demonstrators.
A judicial source said 200 people, including 15 minors, were being held in custody after Saturday's events. Earlier the authorities said 237 people had been arrested.
In recent weeks, the protests have dwindled in size. But the interior ministry estimated the turnout in Paris on Saturday at 10,000, out of around 32,300 nationwide.
That is a fraction of the 282,000 people that took part in the inaugural demonstrations across France on November 17, but more than the previous weekend.
President Emmanuel Macron cut short a skiing trip in the Pyrenees to return to Paris for a crisis meeting late on Saturday. After those talks he vowed to take “strong decisions” to prevent further violence.
“There are people today who try by all means… to damage the Republic by breaking, by destroying things at the risk of killing someone,” Macron said.
'What were the police doing?'
Back in November Macron was caught off guard when grassroots protesters began occupying traffic roundabouts over fuel taxes. He has loosened the state's purse strings to the tune of 10 billion euros ($11.2 billion) to try to defuse the protests.
But the measures failed to quell the anger of the demonstrators, who accuse the former investment banker of being elitist and favouring the rich.
Opposition parties on Sunday took aim at the government's failure to deal with the violence on the streets. Far-right leader Marine Le Pen accused the government of shutting down far-right pressure groups while failing to deal with the ultra-left.
Meanwhile Xavier Bertrand, the president of the regional council in northern France, said the government should not be afraid “to use force and the force of law.” He asked “why did the police not intervene, what instructions were given?”
Weekly newspaper Le Journal du Dimanche asked “What were the police doing? The levels of damage wrought raises questions about the effectiveness of our forces of law and order”.
European parliamentarian Nadine Morano, of the right-wing Republicans party, got in a stinging blow, tweeting about Macron enjoying himself on the ski slopes while “Paris is on fire”.