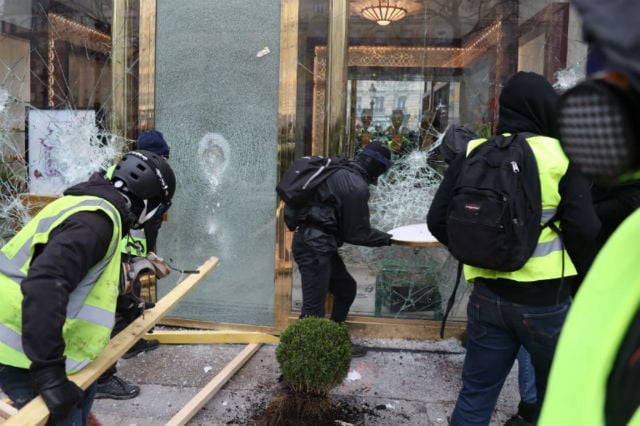 Protesters vandalised and ransacked shops and restaurants on the Champs-Elysées. Photo: Zakaria Abdelkafi/AFP
A Boss menswear store and the upscale Fouquet's restaurant — a brasserie popular with politicians and film stars – were among the premises to have their windows smashed by groups of hooded demonstrators in scenes reminiscent of the worst “yellow vest” riots in Paris in December.
The demonstrators also set fire to a bank situated on the ground floor of an apartment building, which was engulfed by flames. The fire service evacuated the residents and extinguished the blaze. Eleven people, including two fire fighters,
suffered minor injuries, the fire service told AFP.
A mother of four children, including a nine-month-old baby, told AFP they escaped via the stairs after seeing the fire from their window.

Local sources say #French Police lost control of some areas and had to retreat. pic.twitter.com/GixChPKLyU Protesters smashed through the glass shop front of the Boss clothing store. Photo: Zakaria Abdelkafi/AFP
Interior Minister Christophe Castaner in a tweet accused the arsonists of being “neither demonstrators, nor trouble-makers” but “murderers”. Eighty-two people had been arrested by the early afternoon, the police said.
President Emmanuel Macron cut short a skiing trip in the Pyrenees to return to Paris for a crisis meeting, as hooded protesters went on the rampage in Paris, leaving a trail of destruction in the touristic heart of the city.
He vowed to take “strong decisions” to prevent further violence, following the emergency talks held at the interior ministry late Saturday.
“There are people today who try by all means… to damage the Republic by breaking, by destroying things at the risk of killing someone,” Macron said. All those who were there were complicit in” the havoc spread across the
Champs-Elysees, he added.
'Ultra-violent' minority
Saturday's turnout is a test for the “yellow vest” movement, which began in November over fuel tax hikes and quickly ballooned into an anti-government rebellion but has struggled lately to mobilise large numbers of protesters.
Last week, only around 28,000 people demonstrated nationwide, according to  the authorities, a tenth of the numbers that turned out for the inaugural protest on November 17.
The rally coincides with the end of the public debates called by President Emmanuel Macron to try take the heat out of the protests and give voters a forum to propose policy changes.
Around half a million people turned out at townhall-style meetings held  around the country over the past two months.
But many “yellow vests” dismissed the consultation as a smoke-screen.
The police on Saturday used tear gas and water cannon to repel protesters who gathered at the foot of the Arc de Triomphe war memorial, which was sacked by protesters on December 1 in scenes that drew international condemnation. Protesters shelter behind fences during clashes with the police. Photo: Alain Jocard/AFP
Several news stands also went up in smoke as groups of mostly black-clad  demonstrators pelted the security forces with stones and erected barricades.
“There are a number of people who have come just to smash things,” Castaner said, estimating that some 1,500 “ultra violent” activists had infiltrated the crowd of “between 7,000 and 8,000”.
Police fired tear gas to disperse protesters who erected barricades near the Champs-Elysées in scenes reminiscent of some of the most tense “yellow vest” rallies.
The journalist Charles Baudry tweeted footage or riot police in hand-to-hand fighting with protesters.

The Local's columnist John Lichfield, a veteran Paris foreign correspondent, cautioned against seeing the days' events as a revival for the movement.

Wrong to see this as deepening or spreading of movement more a temper tantrum by thugs who fear the movement is declining. But there will be more violence before night fall.

His entire Twitter thread of the day's events is well worth following.

The phalanx of several hundred gilets jaunes/ultra left activists who laid waste to Champs Elysees and burned the bank branch have now doubled back to Etoile. They are again attacking circle of gendarmerie vans and barricades around Arc de Triomphe. Lots of paving stones thrown.

READ ALSO:
From early morning protesters began pouring into the capital by train and car from around the country for what they called an “ultimatum” to Macron.  Over 5,000 police were deployed, along with several armoured police vehicles, and several metro stations were closed.
Macron, who was caught off guard when grassroots protesters began occupying traffic roundabouts in November over fuel taxes, has loosened the state's purse strings to the tune of 10 billion euros ($11.2 billion) to try defuse the protests.
He also travelled the length and breadth of the country, engaging in marathon debates with local politicians and voters.
But the measures failed to quell the anger of the demonstrators, who accuse the former investment banker, of being in the pocket of the rich.
Laurent Casanova, an engineer who was among the protesters, told AFP he had come to mark the end of the consultations.
“We have been patient but now we want results,” he said.
The protest is one of several planned in Paris on Saturday, where French climate campaigners are also planning a “March of The Century”.
The rally started off peaceful, with some protesters carrying signs expressing solidarity with the victims of Friday's mosque shooting in New Zealand. Here a protestor wears a mask of French President Emmanuel Macron daubed with the word 'Psycho. Photo: Zakaria Abdelkafi/AFP
A scooter and stones are thrown by protesters during clashes with French riot forces. 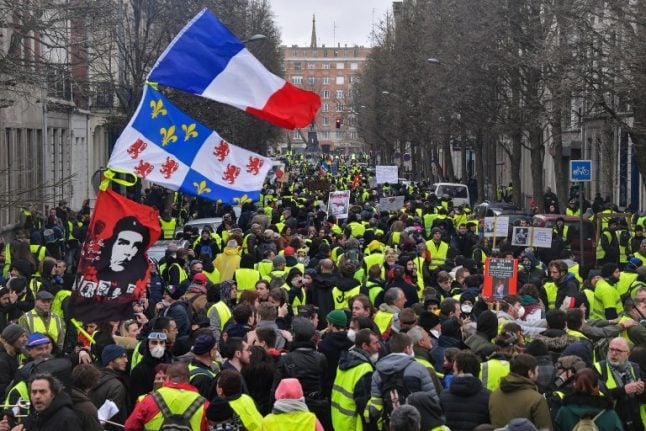 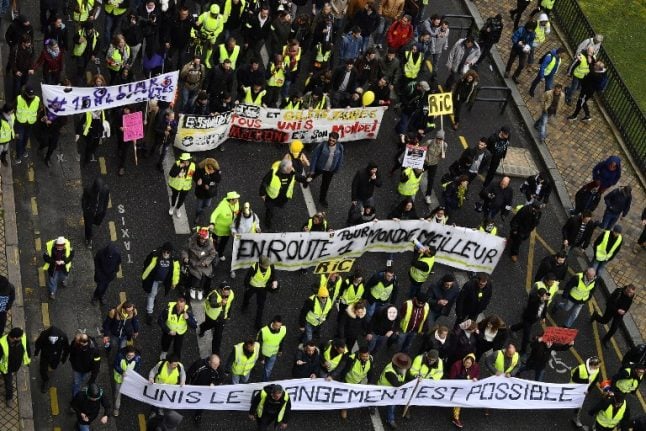