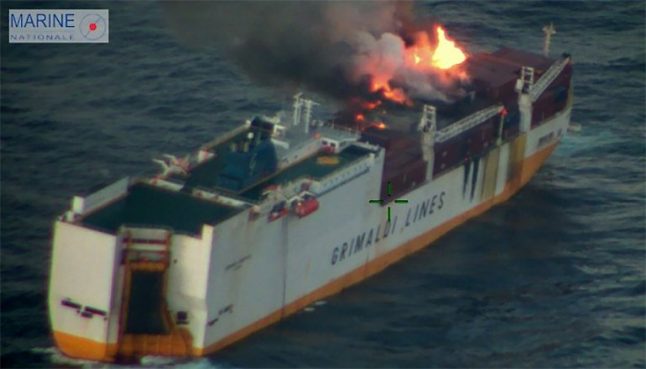 Flames on the Italian merchant ship Grande America. Photo: MARINE NATIONALE / AFP
The French authorities are busy working to reduce the impact the sinking of the Italian cargo ship named the Grande America will have on the western coast of France.
This is the latest on the situation.
How exactly did the oil slick occur?
In addition to 2,200 tonnes of heavy fuel the “Grande America” had onboard, it was also transporting 2,000 cars and 365 shipping containers, 45 of which held dangerous materials, including a hundred tonnes of hydrochloric acid and 70 tonnes of sulphuric acid.
A 10-kilometre (six-mile) by one-kilometre oil slick was first spotted by a French naval aircraft on Wednesday afternoon, after the fire aboard the Italian cargo ship that sank on Tuesday, 300 kms west of the town of La Rochelle. Oil in the ocean after the Italian cargo ship Grande America burned and sank off the western French coast. Handout / MARINE NATIONALE / AFP
What's happening now?
According to the latest reports, the slick has now divided, meaning two separate sheets of oil are now heading in the direction of the south west coast of France.
The two sheets are drifting “directly east” at a speed of 35km per day, said Stéphane Doll, director of Cedre (France's center, research and experimentation on accidental water pollution).
“One is 13 km long and 7 km wide, it has a fairly compact appearance, the second is 9 km long and 7 km wide and looks a little more fragmented,” said Riaz Akhoune
“These two sheets are about 20 km apart,” said the spokesman of the maritime authorities Riaz Akhoune. “The second is vertical to the wreck, which lies at a depth of 4,600 meters.”
All 27 people onboard were rescued.
When is it expected to arrive on the French coast?
The oil slick is creeping towards the south west coast, with forecasts showing fragments of the slick reaching parts of the Atlantic coast as early as Sunday night or Monday.
How are the French authorities planning to deal with it?
“There is a risk, so we must do everything to reduce it and to reduce the impact of pollution of our coasts,” France's Environment Minister Francois de Rugy said.
“Our goal is to pump everything that can be pumped,” he said although he added that the current conditions, with very rough seas, make it is impossible to pump any oil at the moment.
“Reconnaissance helicopters have taken off from Brittany,” said the Minister of Ecological Transition and an underwater robot will also be deployed to see if there are any cracks on the wreck that could still leak oil.
On top of that, a large ship and spill guards are already on site and others should be deployed to try and contain the oil. A VN Partisan ship departing from Brest. Handout / MARINE NATIONALE / AFP
Is any other action being taken?
An investigation into the incident has been opened by the public prosecutor's office and French conservation NGO Robin des Bois has also announced its intention to file a complaint.
Several other environmental protection associations are also studying the possibilities of lodging a complaint.
French MP Matthieu Orphelin, who is close to former Environment Minister Nicolas Hulot, said it was necessary to “go further” in the regulation of maritime freight transport at European level.
How serious is the situation?
On a positive note, it is not an oil tanker that has caused the slick but a cargo ship which means the amount of oil in the sea isn't as high as it could be, Corinne Lepage, a lawyer and former Environment Minister, told La Depeche.
However she went on to deliver the bad news which is that the oil from the Grande America is very dirty, very heavy oil and then there is the chemical pollution, with hydrochloric acid and sulfuric acid which are very harmful for marine fauna. There could also be toxic waste.
How are people reacting?
Oyster farmers have voiced their concerns over the situation, fearing that the pollution from the oil slick could destroy their product.
Normally the sea water which feeds the oyster beds is renewed every 15 days but Pierre-Julien Grassetin, an oyster farmer in Port-des-Barques (Charente-Maritime) told BFM TV that this month, “we will try to keep our water that is already in there and pure”.
However they can only do this once and if they do not have pure sea water afterwards, the oyster farmer “will not be able to work, market our oysters and store them” because they will become unfit for consumption.