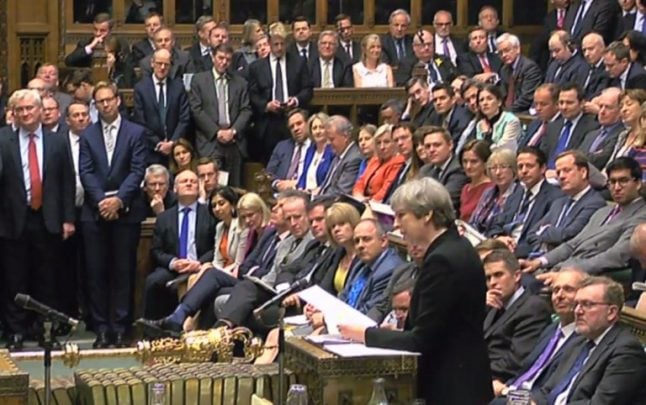 A majority of Members of Parliament (MPs) in the UK's lower house voted to delay Brexit on Thursday and seek an extension to Article 50 from the EU.

Commons votes 412 to 202 to approve a motion to seek to extend the #Article50 period.

It notes that if a deal is not approved, the length of the extension will depend on its purpose. pic.twitter.com/Noe08xFJsJ

The lower house also voted on several amendments. Theresa May survived an attempt for MPs to set the schedule for future debates and talks on Brexit, and wrestle control of the process from her hands, by a majority of only two (312 ayes, 314 noes).

An amendment to hold a second referendum was also defeated by a much wider majority of 229.

While amendments are not legally binding, they offer a barometer of sentiment among MPs. The fact that 332 voted against a second referendum would constitute a majority even if Labour had voted, suggesting more than half of parliamentarians are not in favour of giving the British public a final say on Brexit.

Desires are nourished by delays?

Senior EU figures have expressed differing positions on granting an extension to Article 50, the clause in the Lisbon Treaty which envisages a two-year window for member states leaving the bloc to agree a framework for future cooperation with the Union.

Donald Tusk, president of the EU Council – the political body where ministers from the EU meet to agree policy – suggested he was open to granting the UK an extension.

During my consultations ahead of #EUCO, I will appeal to the EU27 to be open to a long extension if the UK finds it necessary to rethink its #Brexit strategy and build consensus around it.

But opposing views in the EU to delaying Brexit were made evident in a tweet by Guy Verhofstadt, the Brexit coordinator at the EU parliament, in which the Belgian MEP appeared to disagree with Tusk.

“Unless there is a clear majority in the House of Commons for something precise, there is no reason at all for the European Council to agree on a prolongation,” tweeted Verhofstadt.

Under no circumstances an extension in the dark! Unless there is a clear majority in the House of Commons for something precise, there is no reason at all for the European Council to agree on a prolongation. Even the motion tabled for this evening by the UK Gov. recognises this. https://t.co/BNJVVT7Klw

EU Commission President Jean-Claude Juncker has made clear he wants Brexit out of the way before European parliamentary elections in late May.

“I would like to stress that the United Kingdom's withdrawal should be complete before the European elections that will take place between 23-26 May,” wrote Juncker in a letter to EU Council President Tusk on March 11th.

The issue of an extension has also sewn divisions among member states, fracturing the united front the EU27 is keen to maintain. French President Emmanuel Macron said the Withdrawal Agreement could not be renegotiated but showed lukewarm signs that he was open to an extension.

Many EU leaders see an extension as justified only if the UK can present a viable plan as to how it will use the time to dig itself out of the Brexit quagmire.

“If the British need more time, we will examine a request for an extension — if it is justified by new choices on the part of the British,” said President Macron.

Should the UK hand in a reasoned request for an extension, I expect a credible and convincing justification. The #EU27 will consider the request and decide by unanimity. The smooth functioning of the EU institutions needs to be ensured.

Chief EU Negotiator Michel Barnier isn't keen on an extension and feels his, and the EU's work, has been done.

“Prolong this negotiation, to do what?” Barnier asked MEPs at the European Parliament’s plenary session in Strasbourg on the morning of Wednesday March 13th. “The negotiation on article 50 is over. We have a treaty. It is here,” he added.

With the next EU Council summit a week away – March 21-22 – Theresa May  and her negotiators now have a week to try and convince her European counterparts to grant an extension and avoid a cliff-edge no-deal exit on March 29th.

The EU's apparent reluctance to unanimously agree to an extension may just be posturing. Brexit has dragged on for nearly three years, yet as a former senior EU Commission official recently told told The Local “twenty four hours is a long time in Brexit politics.”

Should a long extension be discussed, please give consideration to the 5 million of us living in limbo who are currently facing a cliff edge. We cannnot live like this indefinitely, it is harming health, businesses, families. We need our rights ring fenced.#RescueOurRights https://t.co/1eQfjtiepA