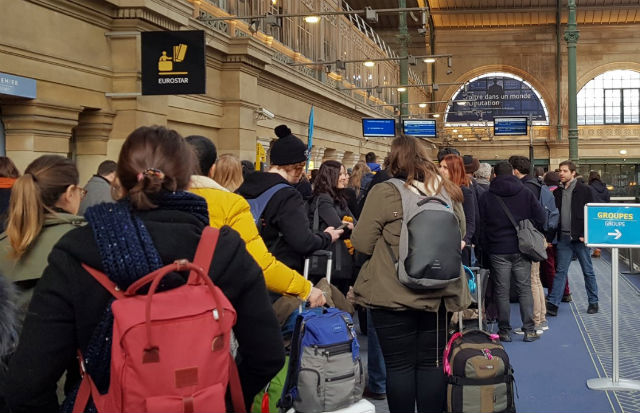 Photo: The Local
On Thursday Eurostar passengers in Paris faced yet another day of travel chaos, with the company warning people to be prepared if they decided to go ahead with their journey as French customs officers continued their protest.
The manager of Eurostar at Paris Gare du Nord, Lawrence posted the following notice on Twitter: “French customs movement still ongoing, Advising all our customers to: only travel when absolutely necessary, arrive 1/1.5 hours before departure, be very patient and ready to queue for 3+hours and to use main station toilets before queuing.”
READ ALSO:

FR customs movement still ongoing, Advising all our customers to :

French customs officials striking for better pay and more staff for the extra work expected with Brexit, turned down an offer of 14 million euros from the government on Wednesday, saying it was not enough.
The work-to-rule strike has caused traffic havoc over the last 10 days for Eurostar passengers at Gare du Nord and Lille, as well as at the port of Calais and the entrance to the Channel tunnel which links France and Britain.
By early evening on Wednesday the line of trucks waiting to get to England through the tunnel had stretched to four kilometres (2.5 miles), the local prefecture said.
The customs agents are demanding an increase in overnight pay, a danger allowance, and more staff and resources to help with greater controls that will be put in place once Britain breaks away from the European Union, currently scheduled in just over two weeks.
But the French unions representing the around 17,000 workers rejected the 14 million-euro ($15.8 million) budget boost offered by the government as it was “not sufficient compared to the agent's demands,” Jean-Marc Jame of the CFDT union told AFP.
“When divided by the number of agents, there is not much left,” he said.