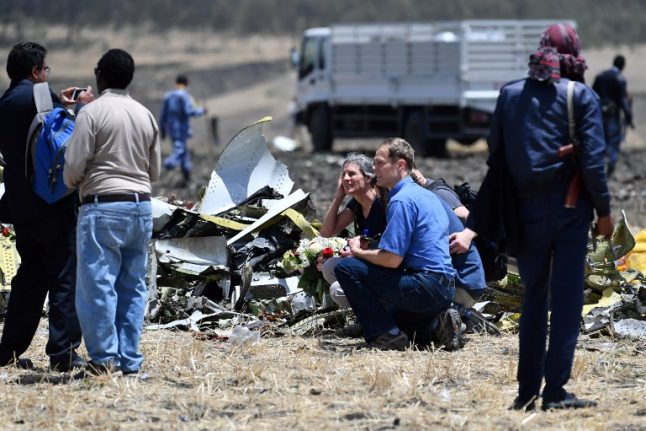 Photo: AFP
“The Ethiopian authorities have asked BEA for its assistance in order to analyse” the two black boxes, the agency said, adding that they would be sent on Thursday.
Earlier Wednesday, Ethiopia said it would send the black boxes to Europe following the disaster, the second deadly crash involving the Boeing 737 Max 8 plane in less than six months.
The Ethiopian Airlines 737 MAX 8 was less than four months old when it went down six minutes into a flight from Addis Ababa to Nairobi on Sunday, disintegrating on impact.
The crash has prompted governments worldwide including the US to ban the American aerospace giant's bestselling jet from their airspace.
READ ALSO: Photo: AFP
France announced it had banned Boeing's 737 MAX 8 medium-haul workhorse jet from their airspace on Tuesday in response to the Ethiopian Airlines crash that killed all 157 people on board.
“Given the circumstances of the accident in Ethiopia, the French authorities have taken the decision, as a precautionary measure, to ban all commercial flights of Boeing 737 MAXs into, out of, or over French territory,” the DGAC authority said.
A number of other countries, including Australia, Britain and China, as well as several individual airlines have also grounded their B-737 MAX 8 aircraft.
Many others are continuing to fly the aircraft pending an investigation into the crash and possible guidance from Boeing itself.
The Nairobi-bound plane was the same type as the Indonesian Lion Air jet that crashed in October, killing 189 passengers and crew — and some officials have detected similarities between the two accidents.
Lion Air Flight 610 vanished from radar shortly after taking off from Jakarta on October 29, crashing into waters off the north coast of Java Island and killing all 189 people onboard.
About 30 relatives of the crash victims have since filed lawsuits in the United States against Boeing, alleging that faults with the new airliner, including with its anti-stalling system, led to the deaths.
Questions were raised by experts and a pilots' union in the US about whether pilots had been properly trained and whether Boeing had fully shared data about changes made to the on-board control systems.
Boeing responded by saying that the 737 MAX was “as safe as any airplane that has ever flown the skies.”
There is no indication that a technical problem was to blame for the crash of the Boeing 737-800 MAX operated by Ethiopian Airlines on Sunday which crashed minutes after taking off from Addis Ababa bound for Nairobi.
An investigation by aviation experts and analysis of the blackbox flight recorders is expected to shed light on the causes of the crash.
There are some 350 of the 737 MAX 8 planes currently in service around the world.