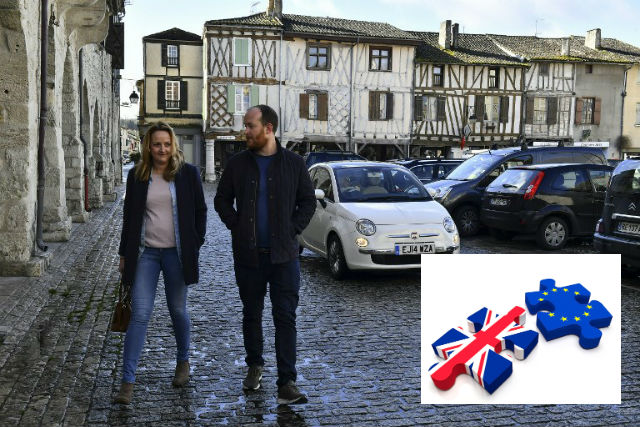 Maura McGuirk and James McConnell are among the many Britons living in the Dordogne village of Eymet. Photo: AFP

With the clock ticking down to a Brexit deadline in 16 days, many people in Eymet, a picturesque village in the Dordogne region home to hundreds of British pensioners, are following events back home with a mixture of anxiety and resignation.

Reacting to Tuesday's vote in the British parliament, which increased the risk of Britain crashing out of the bloc without a deal, Cattermole said he felt “no surprise but simply amazement that this thing has gone on so long and the Prime Minister Theresa May hasn't realised it's not going to work.”

But he said he refused to cede to the panic that has prompted a scramble among Britons in Dordogne, a magnet for retirees and tourists for decades, to seek permanent French residency permits.

“Personally the only thing that concerns people here in Eymet really is the exchange rate,” he said.

“If it collapses because of a hard Brexit, peoples' pensions and the money they transfer from Britain will be affected badly.” Briton Adrian Cattermole in the café he owns in Eymet in southwestern France. Photo: AFP

Maggie Bradford, a Scottish-born 60-year-old who moved to Dordogne six years ago with her ex-banker husband, said she felt powerless.

“How can you do anything if you don't know what the outcome's going to be? We're all living in limbo,” the elegant bed-and-breakfast owner said as she sipped a cup of tea in the cafe.

“I think we just have to get on with it,” she said.

Bradford said she was still holding out hope for a second referendum that would reverse the decision to leave the bloc made in a first vote in June 2016.

Europe 'as way of life'

France has around 150,000 British residents, according to 2017 data from the INSEE statistics agency, with most of them concentrated in the southwest of the country.

Lured by low property prices and warm weather, they have helped regenerate some rural areas, but the influx has also caused resentment among locals in some areas.

Long-term residents in Eymet say their overriding concern is being able to remain in the village of quaint half-timbered houses that has become their home. “We have no fears of the French government being vindictive,” Cattermole said.

“We're all fairly confident that we'll be able to remain and live our lives as we have done, enjoying the fantastic French culture, wine and sun, while Britain sinks slowly into economic disaster.”

France has already begun implementing a Brexit action plan designed to prepare the country for the worst should Britain crash out of the EU without a deal.

The government has been granted powers to pass decrees in the event of a no-deal Brexit which would guarantee the rights of Britons to stay in France – providing the UK reciprocates.

In the run-up to Brexit, some couples anxious to avoid difficulties in moving to France after Brexit have made the switch in recent months. Standing in the shadow of Eymet's 13th-century castle, James McConnell and his fiancee Maura McGuirk said they brought forward their plans to relocate.

“Rather than not being able to come over, we've decided to get over before March 29,” 38-year-old McGuirk explained.

Like many Britons in other EU member states, the pair felt forced to choose between Britain and Europe.

“We've only ever known Europe. We know no other way of life. It's something we take for granted and to have that snatched away is hard to come to terms,” said McGuirk, who grew up in London.

The pair, who left behind jobs in the restaurant trade in London, plan to learn French, open a guesthouse and in time gain French citizenship.

“If we have to choose between being British or French, we choose French,” McConnell, a Suffolk native, added.