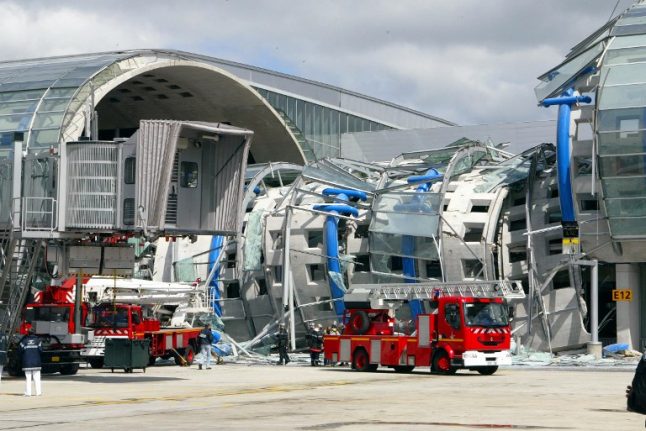 Two people from China and one each from Lebanon and Ukraine were killed by the collapse. Photo: AFP

Aéroports de Paris (ADP) was ordered to pay the maximum fine of 225,000 euros by the court in Bobigny, just north of the capital.

Three subcontractors – the construction company which built the vaulted glass-and-concrete roof at Terminal 2E, and engineering and inspection firms – were ordered to pay fines of 100,000 to 150,000 euros.

The accident occurred early on May 23, 2004, less than a year after the building, designed by award-winning French architect Paul Andreu, was inaugurated to widespread acclaim. Six concrete arches and walkways stretching over 30 metres (100 feet) crashed down on the passengers waiting to board flights at the ultra-modern terminal that ADP boasted was a “showcase for France.”

Two people from China and one each from Lebanon and Ukraine were killed. Seven were injured, including two border police officers sent to the terminal after reports of a worrying crack in the building.

Lawyers for ADP declined to comment on the ruling.

The decision comes as the government is planning to sell shares of ADP to the public as part of a privatisation drive for several state-owned companies.

Critics accuse officials of selling a prized asset that manages either directly or indirectly 26 airports around the world, and brought in 173 million euros in dividends for the state in 2017.