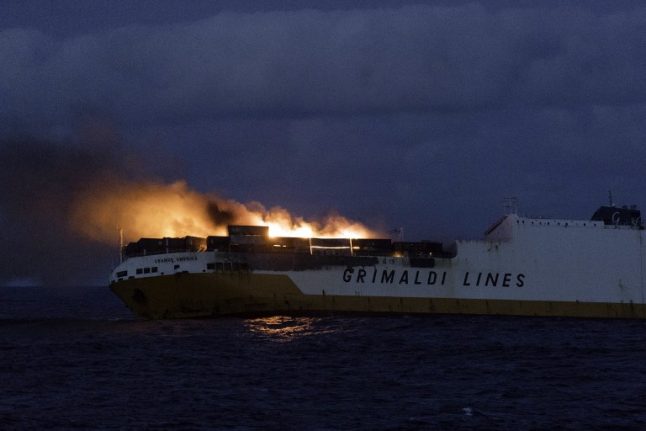 Photo: AFP
All 27 people aboard the “Grande America” were rescued without injury on Monday night.
The ship was on its way from Hamburg, Germany, to Casablanca in Morocco before the blaze, “which intensified over the past 24 hours,” French naval authorities said on Twitter.
“The ship had been listing increasingly to the right as time went on,” it added.
French Environment Minister Francois de Rugy told lawmakers in Paris on Tuesday that officials still did not know what the ship was transporting, but that anti-pollution measures were already being taken.
“As always in these situations, there are pollution risks, we can't deny it, because already there was the heavy fuel used for the engine,” de Rugy said.
A first tugboat to reach the ship was unable to extinguish the fire, and two others were on their way to the site Tuesday when the ship sank in waters that are about 4,600 meters (15,000 feet) deep.