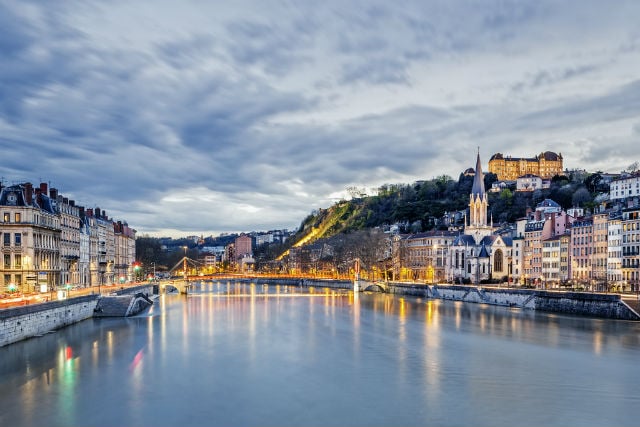 Roughly two hours south of Paris on the train and a two hour drive from the Alps, Lyon also has the benefit of the beaches of France's Mediterranean coast, which are not too far away.

Lyon has a lot going for it, not least its historic centre which is registered as a UNESCO World Heritage site. In 2016, Lyon was voted Europe's leading city break destination at the World Travel Awards.

Lyon is also a cultural hub and it even has a sculpture designed by the same artist who created the Statue of Liberty, Frédéric Auguste Bartholdi. He designed the Fontaine Bartholdi, which can be found in Lyon’s Place des Terreaux.

Shopping is also central to life in Lyon. La Part-Dieu is actually the largest urban shopping centre in Europe.

The city is known as the gastronomical capital of France, with 14 Michelin star restaurants, and it is famous for its annual festival of lights (Fête des Lumieres) in December.

The city is a major centre for banking, as well as for the chemical, pharmaceutical, and biotech industries and it is home to several universities and thousands of international students.

If there's one city in #France, you have to say, it's not necessarily #Paris! Here's why we love #Lyon: https://t.co/lKGrw237eR#travel #wanderlust #ttot pic.twitter.com/JIlqMXk7mF

But what is it really like to live and work there?

No one knows Lyon better than its residents. So The Local reached out to our Lyonnais readers and asked them to reveal all about living and working in the city.

Name the best thing about living in Lyon?

Almost everyone agreed that the best thing about Lyon is its location, near the Alps and not too far from the Mediterranean sea or indeed from Northern Italy and Switzerland. Readers also talked about how it is a calm city in comparison with Paris and about how good the Lyonnais food was.

Mary B mentioned “the accessibility of some of the most beautiful natural ares in France within a 2.5 hour drive”.

While Bronwyn Bertal, who is South African, said she particularly liked Lyon for its “architecture, old and modern, with culture all in one city and an amazing public transport system”.

And if Ouai Dath's comments are anything to go by, the city's deserves its reputation as the country's gastronomic capital.

“You can get a really good culinary experience anytime of the week,” she said.

Chevonne Ball also praised the food, saying: “The food and culture of the Lyonnais is the best in the world!”.

What's the biggest downside about living in Lyon?

Some readers struggled to name any downsides to living in Lyon, though there were mentions for the traffic and also there was a quibble about whether or not it deserved the title of gastronomic capital as so many restaurants close at lunchtime. Mary B said the only negative was “the air pollution”.

This was an opinion reinforced by Jackie Coghlan, who said the worst thing was “the traffic – especially during the school holidays and summer months, which also means increased pollution”.

However, Jim Lockard simply couldn't find any real downside: “I don't see any significant downside, just some minor annoyances, which come with any city”.

What's the best thing to do in and around Lyon at the weekend?

There were lots of varying answers as to what was the best thing to do at the weekends. Readers suggested visiting the churches and the fantastic archaeological museum, not forgetting to refresh yourself at the local vineyards. There were also mentions for the Marche Quai St Antoine at the weekends, the largest market in the city every week.

Mary B said you should “walk, bike, or run in the expansive area parks”. Jackie Coghlan advises visiting “the churches and the fantastic archaeological museum in Lyon and outside it”. She also mentions the vineyards.

Lyon is certainly the perfect city to explore by bicycle. Indeed, this is the place where the bike rental scheme was invented.

Ouai Dath has a simple approach to happiness: “eat and drink. As long as you fulfill the basic needs in a very nice way, Lyon is the place”.

The scenic, urban 'Parc de la Tête d'Or' in Lyon stretches across 105 hectares and is filled with lush green lawns, rose gardens and a vast lake. Plus lots of activities to keep the kids entertained. https://t.co/S0ZpUIWfu8#Lyon #parcdelatetedor #parksandgardens #lyonwithkids pic.twitter.com/Iju9RiBE4a

Bronwyn Bertal says you should “hang out in parks, explore the city centre, theatres, museums, shows, shopping, picnic, take up a choice of many activities and hobbies widely available throughout Lyon”. And there were a number of votes for visiting Parc Tete d'Or with one readers describing it as “a beautiful space with gardens, a zoo, the lake”.

Chevonne Ball lived in Lyon for a year and now brings people on wine tours of Lyon and Beaujolais. She advises you “start with a coffee at Slake Coffeehouse, then walk to the market. Make sure you grab a fresh squeezed juice from Pierre and his vintage car, you can't miss it. Pick up a roasted chicken and a fresh salad for dinner. Perfect day.”

What is the best thing about working in Lyon?

Lyon seems to be a popular place to work, with readers talking about the good public transport system and also the long lunch breaks. One reader said that the “work life balance is better than in most French cities. You can live in the countryside as it can be less than a half hour by car into town (ex-les Monts d’Or).”

Bronwyn Bertal mentions “diverse cultures and the many jobs available in Lyon”. Mary B also mentioned the “large international workforce”. And another reader praised the “long lunches”.

And the worst thing about working life in Lyon?

On the other hand, people found it hard to name many negatives to working in Lyon. Some mentioned the traffic and the fact that the salaries are not the highest in France.

Readers were generally positive about the Lyon locals, describing them as warm and friendly once you get to know them. Jackie Coghlan did mention that “they are very family-orientated and that it is difficult to break into their circle of friends”, so internationals often end up hanging out together.

What's the best thing to do with kids in and around Lyon?

There was something closer to a consensus about what to do with kids at the weekend. Many readers voted for the Parc de la Tête d’Or. Jackie Coghlan said you should “visit the old part of town with the cobblestone streets. Outside of Lyon, there is a wonderful bird park to visit”.

Lyon has a very diverse and established bar culture. Interestingly, there was a complete lack of consensus when it came to people’s favourite bars. Votes came in for Le Terrier du Lapin Blanc, L’Antiquaire and The Wallace.

But Jim Lockard says the only place to go is “La Cave Des Voyageurs – historic, fun, great selection of wines, good charcuterie plates”. While Ouai Dath says you must try Hoppers for its “big portions”.

Lyon has many famous local wines, this wine region has many prestigious appellations including Saint-Joseph, the most popular of all among Lyonnais. And TripAdvisor puts Le Jardin des Delices as its top bar, with people praising its extensive wine list.

One of Lyon’s greatest culinary legends Paul Bocuse died a year ago, but Bocuse's restaurants continue to prosper. And our readers can’t get enough of him, with recommendations for his restaurant L’Ouest Brasserie and his student restaurant Institut Paul Bocuse.

Bouchons dish up hearty warming plates of meaty old school in a convivial setting, the type of place the owner might sit down with you to catch up on all the local gossip. Specialities include tête de veau or tablier de sapeur (fried breaded tripe), andouillette sausages smothered in a rich Beaujolais sauce, or the gâteau de foie de vollaille (mousse-like chicken liver terrine).

TripAdvisor's number one restaurant is Le Bouchon Tupin, And people rave about Bouchon Le Jura, which opened in 1867 and hasn't changed much since then.

Like many typical Lyonnais restaurants, this is one with “la mère cuisinière”. And the chef-owner running the kitchen here is Brigitte Josserand, she has faithfully recreated the signature dishes of Lyonnaise cuisine here for 34 years.

? First sights of the Cité Internationale de la Gastronomie de Lyon, which will open its doors this autumn in the oldest part of the Grand Hôtel-Dieu.

It will give #Lyon the tool to lead a new vision of gastronomy, where food, tradition, history, culture & health meet together. pic.twitter.com/M32O4uqTVn