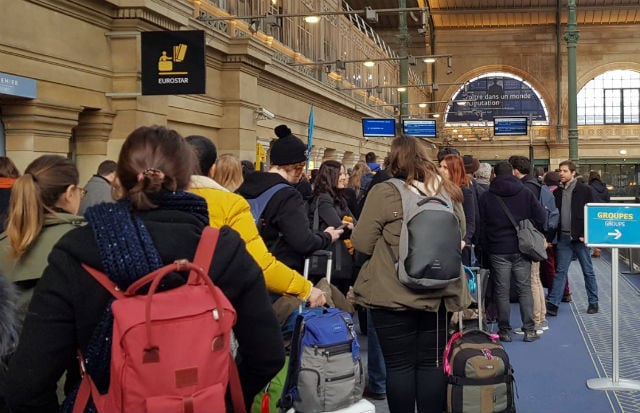 Photo: The Local
The unions, who have been staging a work-to-rule protest met Budget Minister Gerald Darmanin on Tuesday morning while disgruntled Eurostar passengers were stuck in long queues at Paris Gare du Nord.
“We will present a common message to show the urgency of our requests,” said Thomazo.
Their list of demands is clear: additional staff and equipment, new infrastructure and better financial benefits. While waiting for the government's response, they intend to continue their protest which they is aimed at showing the kind of chaos at customs checks that will happen after Brexit.
The French government has announced the recruitment of an extra 700 customs officials, a number seen as insufficient by some unions.
READ ALSO: “The French government has never believed in a Brexit, they are in total denial,” said Thomazo.

“Decisions should have been made a year ago, not three weeks before Brexit.
“This work to rule protest by customs officers at the Eurostar in Gare du Nord began on March 4th and has affected passengers travelling through Calais and Dunkirk as well as the Eurostar terminal in Paris. Skiers hitting the Alps via airports in Lyon, Grenoble and Chambery have also been affected by the work to rule protest.
The officers are pressing their demands for higher pay and demonstrating what will happen if greater controls are put in place once Britain leaves the European Union, planned for later this month.
“Agents are doing longer checks than usual and it creates traffic jams immediately,” said Vincent Thomazo from UNSA union, speaking with The Local.
Thomazo said the extra checks were because customs' agents wanted to get the message across to the French government that they were simply not ready for Brexit.
“Our aim is to attract attention to our worsening conditions of work which will only get worse once Brexit happens,” Thomazo said.
“We are simply not ready for Brexit.”