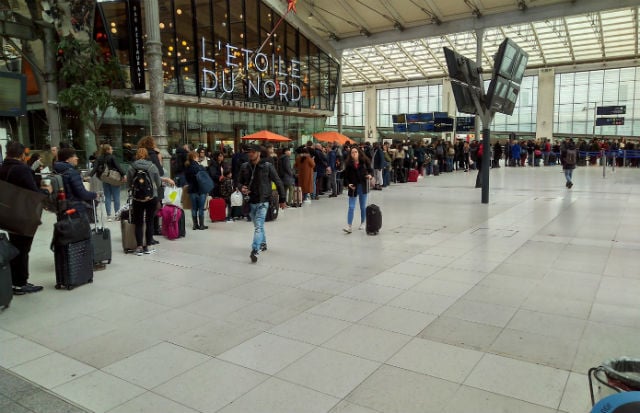 The long delays at Paris Gare du Nord and on the motorways around Calais over the past week have caused no shortage of frustration among passengers and on Saturday the industrial action started affecting people taking flights to French ski resorts.

Here's what you need to know about the situation that continued to blight travel plans on Monday.

The reason behind the industrial action, which began on March 4th, is customs officials are trying to press demands for higher pay and demonstrate what will happen if greater controls are put in place once Britain leaves the European Union, planned for later this month.

Instead of going on strike — meaning they would not work at all — the customs officers have been carrying out work-to-rule industrial action which means that they only do what is required by the rules of their contract.

This means that they precisely follow all safety or other regulations, which has means lots of checks and questions which has slowed down the flow of passengers through terminals at Eurostar, EUrotunnel and the ports in Calais and now at airports in the Alps. Vincent Thomazo from UNSA union told The Local last week that customs' agents wanted to get the message across to the French government that they were simply not ready for Brexit.
“Our aim is to attract attention to our worsening conditions of work which will only get worse once Brexit happens,” Thomazo said.
“We are simply not ready. The administration has simply waited too long to get things in place,” he said.
The French government has announced the recruitment of an extra 700 customs officials, a number seen as insufficient by some unions.
Who is being affected?
The first to be affected were truck drivers travelling through Calais. Long checks caused tailbacks of trucks along the A16 motorway.

At the moment Eurostar passengers and people going on skiing holidays, with flights to Chambéry, Grenoble in the French Alps, and Lyon affected by the industrial action.

Eurostar passengers have taken to social media to voice their anger at the situation, with some kept in queues for over an hour to check-in while trains have been experiencing heavy delays, in some cases for up to several hours.

Hi Edward,
We are expecting around 120 minute delays throughout the day, but you can keep an eye on our live departure page at https://t.co/4RBorlJkG4

The unions have been carrying out action this weekend at airports in Lyon, Chambery and Grenoble.

One person on Twitter put up a post with a photo of the chaos at Grenoble airport (see below): “Grenoble airport – today French customs are practicing passport control for a no deal Brexit. This is the future Brexiteers!”

Grenoble airport – today French customs are practicing passport control for a no deal Brexit. This is the future Brexiters! ? #Brexit #Grenoble #thefuture pic.twitter.com/ABAYatq3bl

How long has it been going on?

The action has been going for a week at the Eurostar terminal at Gare du Nord and began affecting flights to the French Alps this weekend.

Passengers using the EuroTunnel have also been affected off and on over the past week. On Sunday people took to Twitter to voice their frustration at the situation however on Monday passenger services were operating as normal. (Trucks queued up outside port of Calais. AFP)

How long is it expected to continue?

The simple — and for some, irritating answer — is that nobody really knows.

Eurostar services will be hit at Paris Gare du Nord until March 12th at least however the company tweeted to one passenger on Monday morning “we are not aware of when the French douane (customs) action will cease.”

Hi. We are not aware of when the french douane action will cease. At present we are advising passengers for today and tomorrow not to travel unless is necessary. However we may still have issues on Wednesday so we would suggest keep to Tuesday so we can get you to funeral.

Nevertheless, Vincent Thomazo from the UNSA union told The Local on Monday: “This could go on for a very long time.

“I do not think the government is ready to make the concessions we are looking for and border controls are not currently its main priority.”

What should you do if you have Eurostar tickets for the next few days?

Eurostar is advising people with tickets to only travel “if necessary” and is offering ticket exchanges for those affected free of charge.

However as seen above there is no detailed information on when the strike is expected to end.