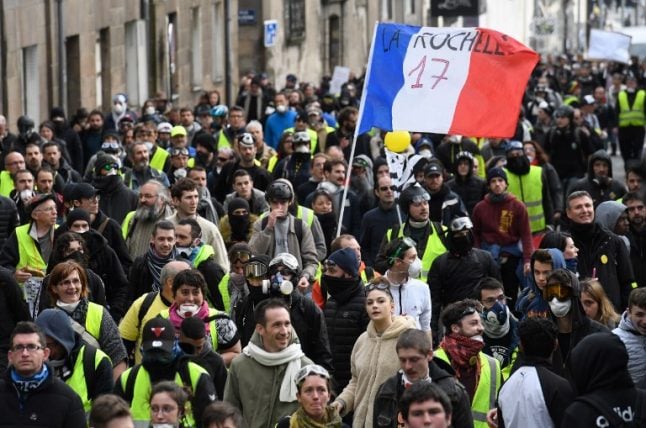 To combat any protest fatigue, organisers have devised original new methods to highlight their anti-government manifesto. This weekend there will be sit-ins and flash protests.

The yellow vests are also marking International Women's Day with a march on Saturday March 9th. Women are advised to wear yellow, pink, purple and red vests for a procession that is scheduled to start from the Champs-Élysées at 11am and continue to the Luxembourg Gardens.

The numbers are down slightly from the previous Saturday, when 46,600 protesters took to the streets across France, including 5,800 in the capital. In general, the numbers have been declining from the 282,000 peak at the start of these anti-government protests last November.

In Paris, rather than the usual Saturday demonstrations, there is a sit-in planned at the Champ de Mars, near the Eiffel Tower throughout the weekend.

The idea is for protesters to invade the park and refuse to budge. A Facebook event has been created to promote this, called “Decisive Act: WE WILL NOT Move!”.

The creators of this page, including members of yellow vest group La France En Colère, are inviting people to occupy the Champ de Mars from Friday evening right through to Monday morning. And this would also be worth keeping in mind if you were thinking of visiting the Eiffel Tower – there will be crowds. To date, more than 6,600 people have indicated an interest in the event.

Priscillia Ludosky, one of the key yellow vest leaders called for a new form of protest. Starting with a three-day “giant sit-in” in Paris on March 8, 9 and 10. At a press conference last week, she said she wanted to “bring the roundabouts” to the capital and “camp, stay there”. In her Facebook message, she encouraged people to “besiege the Champ de Mars (…) until we obtain our social, fiscal and climate demands”.

In addition, there is a call for a rally at Charles de Gaulle airport to the north of Paris. Yellow vest protesters say they will wander peacefully through Terminal 1 of the airport to protest against the privatization project of ADP (Aéroports de Paris).

According to the Facebook event, it is a question of walking discreetly and without a vest in the terminal, until some music plays at 1pm and they all simultaneously put on their vests.

Although protesters say their intention is not to block passengers from getting through departures.

Outside Paris the city of Bordeaux, which has witnessed violence at protests in recent months, will once again host demonstrators. More than 2,000 people have expressed interest in the event via the Facebook page “ACT 17: 20,000 A BORDEAUX!!!”.

Another major event is planned in Puy-en-Velay (Haute-Loire).

The Facebook page “Acte17 La Région Auvergne Rhône Alpes au Puy en Velay” aims to bring together as many yellow vests as possible from the Auvergne-Rhône-Alpes region to the Haute-Loire prefecture. More than 2,000 people have already indicated interest.

The yellow vests have already begun planning their protest for the weekend of March 16th. They have given Act 18 the ominous title 'The Ultimatum'.