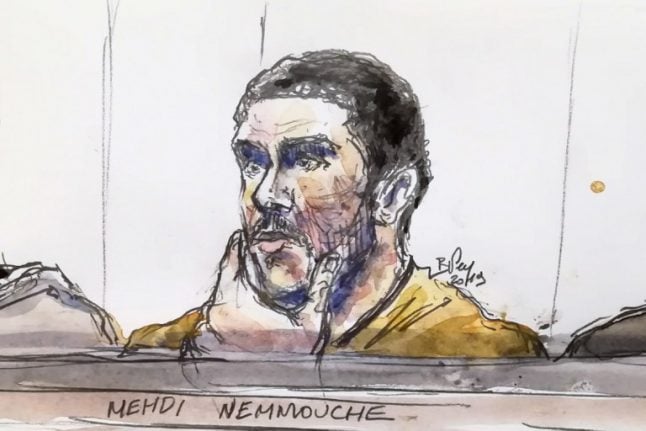 A court sketch made on January 10, 2019 shows Mehdi Nemmouche. AFP

But his journey from a French foster home to a Brussels court began not in a Middle Eastern desert but in a run-down industrial town.

On Thursday, after a two-month trial in the Belgian capital, 12 jurors found the 33-year-old guilty of the four anti-Semitic murders during a shooting spree at Belgium's Jewish Museum on May 24, 2014.

He faces life in prison and is expected to be sentenced on Monday at the earliest.

Nemmouche, an athletic-looking man with a trimmed beard, told the court in his final testimony this week that he had been “tricked”.

He seemed to refer to arguments made by his lawyers that he was not to blame for the murders and had been caught up in some kind of plot targeting the Israeli intelligence agency Mossad.

Separately, he is also accused of acting as the jailer of four French journalists taken hostage by jihadists in Aleppo in 2013.

Nemmouche is already a case study in the radicalisation of some young European Muslims.

Belgium and France, in particular, fear the defeat of groups like the Islamic State in Syria will send more angry young men homewards.

But Nemmouche seems to have been on a radical path long before he set off, in early 2013, for the so-called “caliphate” on the Euphrates.

The investigation into the May 2014 massacre in the museum has pieced together elements of his background. Troubled and angry youth
Nemmouche was born on April 17, 1985, in the northern French town of Roubaix, to a family of Algerian origin.
He never knew his father and his mother was judged not “capable” of raising him, investigators say.
Aged only three months, he was moved to a foster family in the northern industrial city of Lille, where he would stay — off and on — until he was 16.
But his upbringing was not stable. He would make difficult trips to stay with his grandparents, and sometimes to care homes or a Parisian orphanage.
His foster parents, in documents seen by AFP, describe him as an “angry” youth, “capable of the worst as well as the most kindly” acts.
He committed his first known crime at 13, then at 16, he spent three weeks in a juvenile prison for a hold-up with an air pistol after being convicted by a children's court.
His criminal record grew ever longer in his late teens, with traffic offences and muggings, and his grandmother lost track of him after his second jail term.
In 2007, aged 22, he headed to Provence in southern France after gaining a vocational qualification as an electrician, but soon fell back into trouble.
“What an enormous waste,” his former lawyer Soulifa Badaoui said after the museum murders, lamenting the fact that the authorities had not helped Nemmouche to integrate.
“No one knew what to do with an intelligent, lively young man who wanted to get out, become an ordinary French citizen,” she told AFP. 'Sadistic and narcissistic'
Between December 2007 and December 2012, he spent five years in custody — and investigators believe this is when his ideas hardened.
In prison, he was known as an “extremist proselytiser” who tried to organise group prayer and spoke of jihad and the 1995 “genocide of Muslims in Bosnia”.
This linked him to the “Roubaix gang” — French Islamists who returned from the Bosnian war and carried out robberies to fund Al-Qaeda, some of whom he knew.
When his grandmother saw him in Tourcoing in December 2012, he had a long beard and was praying daily, something she had not seen before.
Less is known about his experiences in Syria, but three former French hostages have identified him as their “strict and violent” overseer.
They say he did not hide his admiration for Mohammed Merah, who murdered three French soldiers, a Jewish teacher and three young children in 2012.
Former hostage Nicolas Henin told the trial last month that he had “absolutely no doubt” that Nemmouche was his jailer and torturer in Syria.
Henin described him as a “sadistic, playful and narcissistic” man.
Nemmouche, who was extradited to Belgium over the museum shooting after being arrested in Marseille, will go on trial in France over the hostages at a later date.
Held under tight security at a prison in Leuze-en-Hainaut, his lawyers describe him as a man of “steely will” who was bearing up well under the pressure of incarceration.
“When he greets me with a warm, relaxed smile it's as if we're not in prison,” defence counsel Francis Vuillemin told AFP. “The walls seem to slip off him.”