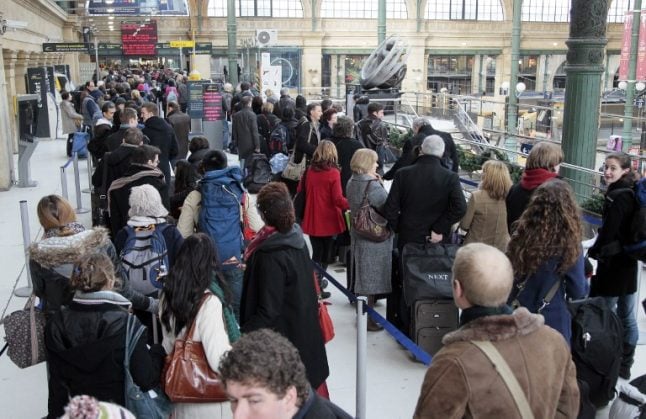 Eurostar passengers are being forced to wait up to two hours as border guards are staging “Brexit-style” security checks at the Gare du Nord station in Paris. People have described the situation as absolute chaos with little or no information being relayed to those stuck in solid queues.

I didn’t have until I saw the chaos at Eurostar gate du nord. Might not be getting home tonight !!

French Customs on day 2 instigating what I think are 3rd Country “reinforced” checks ahead of No Deal Brexit on all passengers at Eurostar terminal, (Calais too on freight) douane asking everyone (incl EU/UK) after bag search why in France, & for how long = lengthy queues/delays pic.twitter.com/RrrownV21R

Eurostar apologised on Thursday morning for the impact on people's travel plans.

In an official statement, they said “We are expecting sizeable delays and congestion in Paris Gare du Nord today (07/03/2019).

“We would recommend not travelling unless necessary, it will be possible to change or refund your ticket for free should you decide not to travel. Should you need to travel, please make sure that you proceed to the ticket gates at the time indicated on your ticket. Arriving later could risk you missing your train.”

There were also continued traffic problems around Calais where reinforced checks by custom officers resulted in trucks being backed up for several kilometres along the motorway on the A16 motorway.

Two truck storage areas were in operation, and trucks from Belgium were being forced to turn around.

Traffic was very disrupted on the A16, A26 and A25 this Thursday morning, according to local newspaper La Voix du Nord.

Eurotunnel advised that if you are driving to their Calais Terminal, you should avoid the long queue of lorries and use Junction 42.

Heading to our Calais Terminal, do not queue up behind the congestion of lorries as our passenger entrance Junction 42 is free of access. Please drive carefully, thank you. ?:oliviercaenen/Instagram ^VH pic.twitter.com/45NxVoysK4

Policy Director of the UK's Road Haulage Association Duncan Buchanan said these delays showed “when one part of a supply chain does not function properly.”

Some motorists have filmed the lengthy and static traffic jam of lorries.

Miles and miles of queuing lorries starting 33km outside Calais – thank you Brexit, this is just the start. pic.twitter.com/zxbPH750Wg

This is a protest that could run and run.

Vincent Thomazo from UNSA union told The Local on Wednesday that “it's a strike that might last a long time because officers are just doing their jobs.”

It began on Monday to press their demands for higher pay and demonstrate what will happen if greater controls are put in place once Britain leaves the European Union, planned for later this month.

Thomazo said the extra checks would continue because customs' agents wanted to get the message across to the French government that they were simply not ready for Brexit.

“Our aim is to attract attention to our worsening conditions of work which will only get worse once Brexit happens,” Thomazo said.

“We are simply not ready. The administration has simply waited too long to get things in place,” he said.