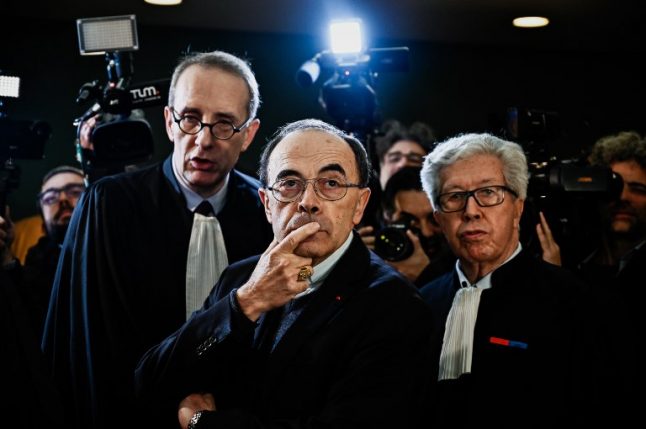 Cardinal Barbarin (centre). Photo: AFP
Cardinal Philippe Barbarin, who was not in court, was found guilty of failing to report the abuse of a minor between 2014 and 2015.
The Cardinal later announced he would resign his post following he conviction.
“I have decided to go to see the pope to hand him my resignation,” Barbarin, 68, the archbishop of Lyon, told a news conference after he was handed a six-month suspended prison sentence earlier in the day by a court in Lyon.
His lawyers had earlier stated they would appeal the decision.
“The reasoning of the court is not convincing,” lawyer Jean-Felix Luciani told reporters. “We will contest this decision by all the means possible.”
Barbarin, 68, faced long-standing allegations from victims' groups that he failed to report a priest under his authority to police after learning of abuse which took place in the 1980s and 90s. Photo: AFP
But prosecutors judged that those crimes were beyond the statute of limitations — meaning they were too old to prosecute — and declined to press charges.
During the trial, victims accused Barbarin of being aware of the abuse allegations from at least 2010 and then trying to cover up the scandal, under orders from the Vatican, from 2015.
Francois Devaux, who leads a victim's group in Lyon, called Thursday's verdict a “major victory for child protection.”
The Catholic Church has been roiled in recent years by claims against priests which have come to light in the wake of a global move by victims to go public with evidence.
“I cannot see what I am guilty of,” Barbarin had told the court. “I never tried to hide, let alone cover up these horrible facts.”
Clerics have been denounced in countries as far afield as Australia, Brazil, Chile, Ireland, and the United States, leading Pope Francis to promise to rid the church of a scourge that has done enormous damage to its standing.
The case broke three years ago and lawyers for nine adult plaintiffs — former boy scouts allegedly abused by priest Bernard Preynat — took legal action.
Since the abuse relates to acts committed before 1991, prosecutors had declined to press charges because of the statute of limitations.
The trial went ahead only because the plaintiffs bypassed the prosecutor's office and insisted, as they are entitled, on putting their case before a court.
Under French law, the court can still convict and even jail the suspect, regardless of the prosecutor's position. Photo: AFP
Barbarin and his co-defendants have denied covering up the scandal, with the archbishop saying he found out the full story about the priest only after it became public.
Preynat, who was charged with sexual abuse in 2016, is expected to be tried later this year.
He was first interviewed by church leaders in 1991, but Barbarin only suspended him and stopped him from working with children in September 2015.
Plaintiffs point to an exchange in 2015 between Barbarin and the Vatican, which advised him to dismiss the offending priest “while avoiding public scandal”.
Jean Boudot, lawyer for the victims, accused Barbarin of being a “liar” when he said he had only learned of the breadth of the damage in 2014.
Barbarin said he confronted Preynat, about the abuse “rumours” in 2010 but let the matter drop after Preynat insisted he had changed.
In 2014, after meeting with one of the priest's victims, Barbarin contacted the Vatican about the affair, but he only removed the priest from his post a few months later.
Two other French religious figures have been convicted of failing to report child abuse in the past: the archbishop of Bayeux-Lisieux, Pierre Rican, in 2001, and the former bishop of Orleans, Andre Fort, last year.
Pope Francis last month promised an “all-out battle” to tackle every single case of sexual abuse by priests, comparing paedophilia to “human sacrifice”, but drew an angry response from victims.