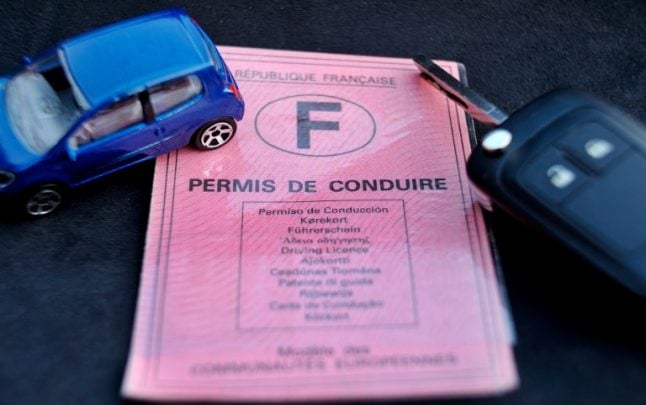 Photo: AFP
Britons living in France were subjected to even more Brexit worries this week after the French authorities said they would not be processing some applications to exchange British driving licences for French ones until they know exactly what's happening with Britain's departure from the EU.
The announcement, published on the website of the Loire-Atlantique prefecture in Nantes, came after Britons had previously been told by the UK government to exchange their driving licences “as soon as possible to make sure you get one before 29th March 2019”  – the day when the Britain is scheduled to leave the EU.
The Centre d'Expertises et des Ressources des Titres – Echange des Permis Etrangers (CERT – EPA) based at the prefecture in the French city of Nantes, located in the Loire-Atlantique department, is responsible for processing driving licence exchanges for the whole of France except for people living in Paris.
The Local spoke to Serge Boulanger, the second-in-command at the Nantes prefecture, to get the answers to some of your most pressing questions on what this means.
(Thanks to members of the Facebook group Applying for French Driving Licence for putting forward questions) Photo: AFP
Why was the decision made to stop accepting applications from Britons trying to get French driving licence?

Serge Boulanger: The terms and conditions of Brexit are still unknown. We have received 5,000 dossiers since January 15th from British citizens alone and have distributed EU driving permits to some of them knowing that we will have to replace these once Brexit goes through. This means double the work for our team.

We have started returning applications from British citizens with a letter and we ask people to hold off until we know what is happening with Brexit, for example whether Britain will leave with a deal or in a no-deal situation.

There are exceptions however, for example people whose licence is about to expire. We will still exchange these licences, even though we'll have to change them again later, to make sure that people can continue driving.

I want to stress that this is not a rejection of applications from British nationals but instead a delay until we know more about what is happening.

Can you confirm if there will be a transition period in the case of a no-deal Brexit for those with a British licence?

Serge Boulanger: This is something that the government will decide and I don't have any information on this, however I will say that we are still optimistic that there will be a deal.

If there is no deal I imagine there will be some kind of arrangement to ensure that British citizens can continue to drive using their UK licence.

NOTE: The British Embassy has made this point to The Local: French Europe Minister Nathalie Loiseau reassured British people resident in France on Friday that there would be a grace period from the date of Brexit for them to get their papers in order and that they would not be considered ‘sans-papiers’. In the event of a no deal Brexit, it seems that a temporary system would be put in place to allow UK nationals resident in France to continue to use their UK licences until the French government puts a new system in place.

Do you know the timeline for the new system being introduced after March 29th and what will happen if there is a delay?

Again, this is something for the government to decide. I understand that people are very worried but we are optimistic that arrangements will be made.

Many people have said the most frustrating thing about the whole process is the lack of communication from CERT once they have applied. Are there plans to improve this?

We are currently in the process of improving the system, which we are aware is not very good at this stage.

It should be ready within the next month and will mean we are able to notify people by email when we have received their application, when we have started processing it and when it has been approved.

The new system will also enable people to apply for their French driving licence online. Can you tell us how the applications are prioritised?

There are two ways of prioritising requests.

We make sure that the oldest requests are handled first unless there are emergency applications, such as someone who has had their licence stolen — which happens a lot.

Do you know how much longer someone who applied for their French licence back in 2017 should have to wait?

We have managed to catch up with most of the applications going back that far. However we do have around 150 that have not been dealt with — although these aren't all from British people.

My advice for those who applied for their French licence in 2017 or early 2018 is to write to us using the online form here and mark it for my attention (Serge Boulanger). I'll look into the matter and get back to the people concerned because my worry is that some of the dossiers may have been lost at this point.

How long should people allow to exchange their licence when it is about to expire?

Applying six months ahead of the expiration is about right although it's worth noting that there are delays.

One thing to note for British women who are married is that their applications often take a lot longer. This is because in France women go by their maiden names on many official documents, including driving licences. However maiden names do not appear on British licences. As a result the French authorities have to go through the extra step of contacting the woman in question and asking for proof of her maiden name, which is usually provided in the form of a birth certificate.

Do you have any advice for British people who want to exchange their driving licence?

Yes, I advise that they remain patient but pay close attention to any developments around Brexit.

When we know what is happening with Britain's departure from the EU we will have instructions for what to do next on our website.

Also, remember that we are talking about two countries that have respect for each other and a long history —  there will be a solution.