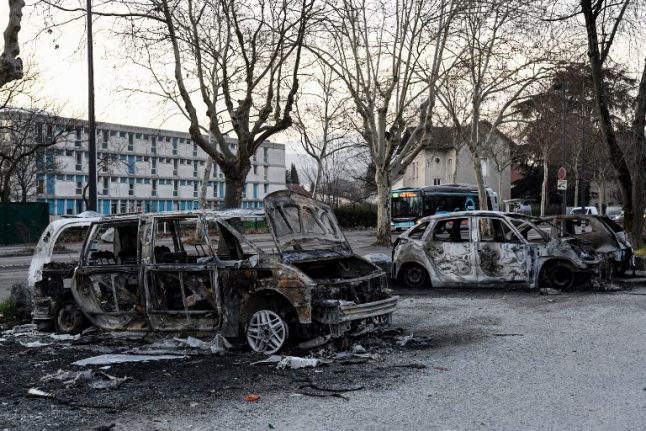 Clashes began on Saturday evening when two men, aged 17 and 19, were spotted by police riding a stolen scooter without a license plate and without helmets.

They were being followed by a police vehicle when they crashed into a bus, according to the local prosecutor's office which is treating their deaths as accidental.

“Young people from the neighbourhood saw what happened and have the feeling that there was a mistake by the police,” said Hassen Bouzeghoub, the director of a social club in Grenoble's Mistral area where the men died. A family member, who did not give his name, claimed “police are responsible for their death” in comments made to an AFP reporter outside the city court on Sunday.

But the Grenoble prosecutor's office has rejected police liability, saying the men had put others in danger by “running red lights, driving on the
pavement, and driving at high speeds”.

The fatal shooting of a man in the western city of Nantes sparked nights of rioting last July. The officer was later charged with manslaughter.

In 2005, three weeks of clashes erupted across the country following the deaths of two black teenagers who were electrocuted in a Paris suburb while hiding from the police.

Police were later cleared of wrong-doing in a trial.

Last week, Grenoble's Mistral district also erupted in violence after a man was arrested for possession of cannabis.

Grenoble has a reputation for outbreaks of violence in its troubled suburbs, but the city, known as the “Capital of the Alps' remains popular for students and visitors alike.

Indeed two recent surveys in France plus some that are a little older suggest that the city surrounded by snow-capped peaks that boasts the world's first urban cable car could be the best city to live in France.

READ ALSO: Grenoble: Is the 'capital of the French Alps' the best city in France to live in?