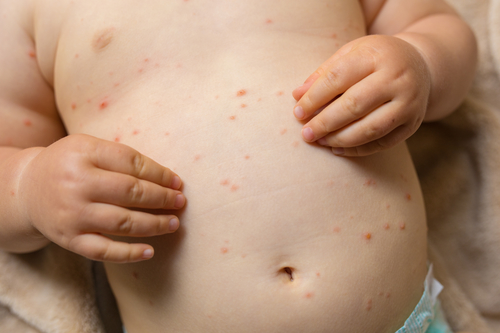 File photo: Measles Depositphotos
What is measles?
Measles is a highly contagious, infectious disease.
According to Olivier Robineau, a specialist in infectious diseases at Tourcoing Hospital, it is “one of the most contagious diseases.”
“A single patient can infect 18 other people who have not been vaccinated or who did not have measles during their childhood,” he previously told Le Parisien.
Why is it in the news in France at the moment?
Because in the words of professor Elisabeth Bouvet, it is making a “marked comeback” in France.
In one example back in February French health authorities warned of a surge in measles cases at the Val-Thorens ski resort, one of the highest in the Alps and a popular destination for both French and foreign tourists.
The 18 recorded cases “were mostly young adults working at the station this season,” the ARS regional health agency for the Auvergne-Rhone-Alpes district said.
Unicef (United Nations International Children's Emergency Fund) announced on Friday that along with Brazil and Ukraine, France is one of ten countries responsible for the 75 percent increase in measles cases in 2018. The health minister Agnes Buzyn has been forced to explain the rise of the disease.
“We are seen as the country capable of spreading measles in the world,” said France's Health Minister Agnes Buzyn in an interview with Le Parisien. “What is amazing is that we are a European country where it is very easy to get immunized.” Photo: Depositphotos
What are the figures?
Just this year, a total of 244 people have been infected with measles in France.
In 2018, there were 2,913 cases of measles in France — the highest level in Europe. Comparatively there were only 519 cases of measles registered in France for the whole of 2017.
Cases have been rising in France and other parts of the developed world in recent years, the result of fewer children being vaccinated against a viral disease that causes rashes and inflammation which can quickly prove fatal.
Along with Brazil and Ukraine, France is one of ten countries responsible for the 75 percent increase in measles cases in 2018, Unicef (United Nations International Children's Emergency Fund) announced on Friday.
The virus had previously been considered virtually eradicated. Indeed, ten years ago, the potentially life-threatening disease had almost disappeared from France. Photo: AFP
How many people are dying from measles in France?
In 2018, the virus killed three people in France: a 32-year-old unvaccinated mother at the end of February, a 26-year-old suffering from an immunodeficiency at the end of June and a 17-year-old girl, who died in July “from neurological complications” at Bordeaux University Hospital.
Since 2008, 23 people in France have been killed by measles.
Why is it making a comeback?
Health authorities and the government say this is a direct result of not enough people being vaccinated against the potentially life-threatening disease, especially in certain parts of the country such as the south west.
How many people are vaccinated against measles in France?
In France, as elsewhere, more than eight out of 10 measles patients had never been vaccinated against the virus, according to the European Center for Disease Prevention and Control (ECDC).
In France 90 percent of children receive their first dose. However, according to doctors the problem is that many in France – potentially up to one million – do not receive the necessary second injection of the MMR vaccination (Measles Mumps and Rubella).
“This second dose is necessary for the elimination of the disease because between 7 percent and 8 percent of children do not react to the administration of the first vaccine,” the doctor Daniel Lévy-Bruhl told Le Monde newspaper.
In France no department in the country has reached the 95 percent vaccination rate, health authorities say.
The reason behind this in France is partly down to a lack of trust in vaccines.
In 2016, a study by eBioMedecine revealed that France was the country in the world that was most skeptical about vaccinations, with 41 percent of those surveyed saying they felt that vaccines were not “safe”. Photo: AFP
This distrust seems to have eased, however, with the most recent survey conducted by Ipsos in July 2018 showing that 83 percent of French people are now in favour of vaccination.
But in order to fight against the spread of the virus and hopefully eliminate it, at least 95 percent of the population of young children and young adults born since 1980 should have received both doses of the MMR vaccine, France public health authority (Sante Publique France) told Le Parisien.
The measles jab was only made obligatory by law in France on January 1st 2018. Previously these vaccinations were only recommended by the state and the decision whether or not to inoculate a child was left in the hands of the parents, who were often swayed by theories and scare stories about health risks of certain vaccines.
Measles has been officially wiped out in the United States due to a vaccination programme put in place over recent decades.
Why are people born in the 1980s at a higher risk of catching the disease?
Despite being around since 1966, the measles jab didn't appear on the vaccination calendar until 1983 and it took a while to catch on.
For example, in 1987 only 50 percent of children in France were immunised against the disease and in 1988 the figure still barely hit 60 percent.
That means that a lot of people born in the 1980s grew up without being vaccinated and without experiencing the disease as a child, as a result of the decreasing levels of measles.
Previously people tended to catch measles as a child and would become immune to it.
On top of that, in the 1980s – mid-1990s children only received one injection which isn't enough. The second injection was only introduced in 1997.
Once the second dose was introduced “With both doses, the number of estimated cases (the measles declaration becomes compulsory only from 2005) falls from 331 000 in 1986 to 4,448 cases in 2004.
Is it more serious if adults catch the measles?
Cases of measles in adults are far rarer than they are in children. However if an adult does catch the disease there can be severe complications, as there can be if a child under 12 months catches it.