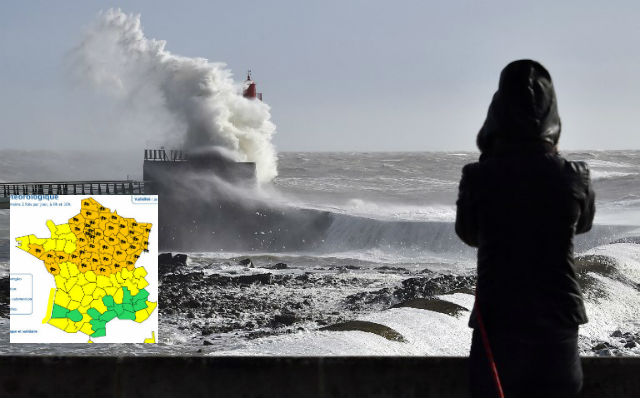 It's just a week since people in France were basking in the delights of an early-spring scorcher.

However on Monday morning orange weather warnings were put in place in 44 departments across the country by national weather agency Meteo France.

The current warnings were put in place on Monday at 6 am and are expected to last until at least 6 am on Tuesday. “The strong winds associated with Storm Freya hit the western part of the country on Sunday night and will spread to a large northern half Monday (strong gusts up to 90-100 km/h inland, locally 110 km/h on the coast),” said Météo France.

Orange alert is the second highest warning, meaning people in those areas should take precautions due to the risk of dangerous weather conditions.

The winds are expected to really get going at around midday, with winds expected to reach up to 110 km/h locally on Monday, particularly in the Breton department of Finistere, the Cotentin Peninsula in Normandy, as well as in Jura, a department in eastern France.

Gales of 150 km/h have already been recorded since the storm hit France on Sunday on Belle-Ile-en-Mer, an island off the coast of Brittany.

While gusts of 120 km/h were recorded Sunday in Camaret-sur-Mer, a town in the Finistere department and gales of 144 km/h were recorded in Groix, another island off the coast of Brittany at 5 am on Monday morning, according to Météo Bretagne.

Parisians struggled to get a good night's sleep as a result of the storm on Sunday, with gusts reaching 138 km/h at 11.40 pm at the top of the Eiffel Tower.

People in the affected regions are advised to be careful particularly in Brittany and on the coast near the English Channel.

Britain, Ireland and the northern half of France will be most affected by the storm.