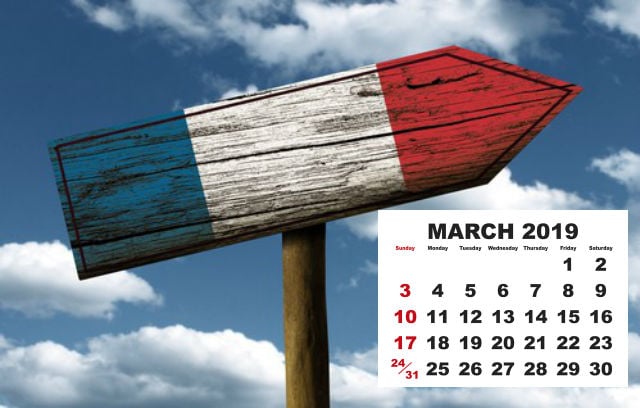 The consultation on social security reached its conclusion on Monday, with French Prime Minister Edouard Philippe saying that trade unions and employers could not agree on the framework for the government's proposed changes.

The prime minister announced that the details of the measures chosen by the government would be presented in the spring and will be the subject of a decree this summer, however unions and employers will be consulted once again in the meantime.
Meanwhile French President Emmanuel Macron is set to meet with members of the One Planet Lab for the first time on Monday. These are handpicked experts to help him identify and strive for clear and accessible climate policy goals. Macron addresses the One Planet Summit in September 2018. Photo: AFP
Tuesday March 5th
The French Prime Minister will give a speech along with Chairwoman of the International Monetary Fund Christine Lagarde on Tuesday in Paris in honour of the tenth anniversary of France's national competition regulator.
The verdict will be heard on the Levothyrox case in France on Tuesday.
A total of 4,133 patients are claiming €10,000 in compensation from German pharmaceutical group Merck, which produces the thyroid medication, for the company's failure to highlight a formula change which caused negative side effects.
Chanel will present its final collection designed by the fashion house's iconic artistic director Karl Lagerfeld for the final day of Paris Fashion Week.
Lagerfeld, also known as the “Kaiser”, died in the French capital in February aged 85.

Photo: AFP
Wednesday March 6th
French football team PSG will play Manchester United in Paris on Wednesday in the return leg of the Champions League.
Thursday March 7th
A new mayor of Bordeaux will be elected on Thursday after Alain Juppé's shock resignation in February.
Juppé, the mayor of Bordeaux and former prime minister, announced that he was leaving his post one year before the end of his third consecutive term, describing his decision as “heartbreaking”.
Meanwhile Macron will be in the southern Provence-Alpes-Côte d'Azur region on Thursday to continue his national consultation (Grand Débat).
The debate was launched in January in the hope of quelling months of anti-government unrest on the streets.
On Thursday a French court will rule in the trial of Cardinal Philippe Barbarin and five former members of the diocese of Lyon for allegedly covering up for a priest, Bernard Preynat, accused of abusing around 70 scouts between 1986 and 1991.
The case is the subject of the film “By the Grace of God”, which won the jury prize at the 2019 Berlin film festival. Lyon archbishop, cardinal Philippe Barbarin. Photo: AFP
Friday March 8th
There will be demonstrations across France on Friday in honour of International Women's Day, with demonstrations, flash mobs, discussions and parties set to take place in the French capital. Find out more about the day's events here.
Despite a drop in the number of people participating in Saturday's 'yellow vest' protests, the Gilets Jaunes are calling for a “decisive act” lasting three days this weekend. Not many details are available on what exactly is being planned so watch this space.
Saturday March 9th
In honour of International Women's Day, the French Aikido and Budo Federation (martial arts) in Paris will be offering free sessions to everyone.
The goal of the modern Japanese martial art of Aikido is to create a method of self defence while also protecting the attacker from injury. Find out more here. International Women's Day march in Paris 2018. Photo: AFP
Sunday March 10th
Paris-Nice cycle race, March 10th-17th
Now in its 77th year, the 1,290 km/h cycle race between Paris and Nice is also known as the Race to the Sun, due to the start in Paris, where March is often cold and windy, before finishing in the sunny south of the country. It covers seven gruelling stages of varying terrains – you can view the route here.
Run by the same company that organizes the Tour de France, it is a great chance to see some of the world's top cyclists in action – whether you choose to cheer them on from the side of the road, or from the comfort of your sofa.
France will play Ireland in round four of the Six Nations rugby tournament on Sunday.