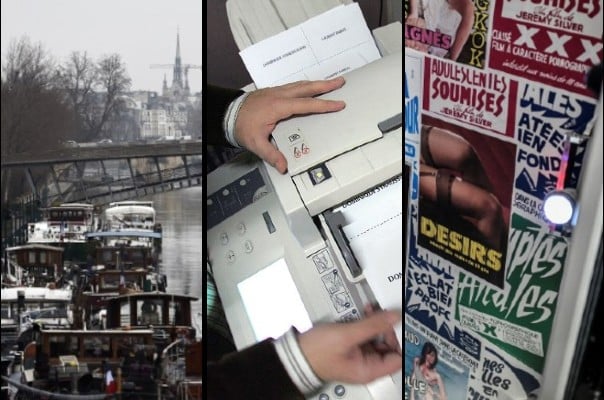 The Organization of Economic Cooperation and Development (OECD) released a study in December showing France as the most taxed country in Europe. Less well known than the country’s more typical taxes are a number of small, unusual tariffs.

The lion’s share of the French government’s revenue – about 45% – comes from the TVA (Value Added Tax), the normal rate of which is 20% that's applied to all goods and services, but various administrations have created special supplementary taxes on certain items over the years. Here are a few of the most noteworthy:

France has a rich historical heritage, which means that those who have a foundation dug for a house or a swimming pool may just run into the ruins of a Roman temple or Bronze-age dolmen. In order to safeguard these archaeological treasures, the state requires that a tax be paid – €0.53 to €3.18 per square meter, depending on location and the nature of the project – in order to finance archaeological excavations prior to construction, so as to ensure that a priceless piece of history isn’t being destroyed. Always dreamed of living on a houseboat, like Johnny Depp in Chocolat? You might want to reconsider. Besides having to pay the property tax (taxe foncière) on the boat and the residence tax (taxe d’habitation) to live there, there’s also a license fee that has to be paid to the organisation that manages France’s navigable rivers (the VNF – Voies navigables de France), which can cost anywhere from €100 to €900 per month, depending on the length of the boat and where it’s moored. You do the math. The oldest tax on this list goes all the way back to 1667, and applies a tariff of €13 to anyone who engages the services of a lawyer in a case that goes before a judge. The benefactors? It’s the lawyers themselves, as the revenues collected go towards funding their pension fund.

Anyone who has lived in France for a certain period of time has probably noticed a certain proclivity for the printed word – flyers, informational pamphlets, junk mail, etc. So it’s a pretty clever move for the state to tax the sale of photocopiers and printers, which it does at 3.25% on top of the TVA. The good news? The funds collected go directly to the National Book Center the National Library. All billboards, posters, and signs can be subjected to a municipal tax, usually between €15 and €30 per square meter, per year. While there may not be a lot of sympathy for large enterprises putting up unsightly billboards, just remember that the baker who wants to put his family name on his boulangerie has to pay it as well.

If you feel like plane tickets out of France seem to be a bit more expensive, you may be on to something: they are subject to a ‘solidarity tax’ which goes directly to UNITAID, an international non-profit dedicated to fighting pandemic diseases like AIDS and malaria.

Jacques Chirac and former Brazilian President Lula da Silva attempted to get all the world’s countries to apply the tax back in 2006, but it was only adopted by eight other countries: Cameroon, Chili, Mauritius, the Congo, Madagascar, Mali, Niger, and South Korea.

The street-sweeping tax, to be determined by the municipality and paid to them by building owners, finances the salaries of your local street-sweeper. The City of Paris put this one into effect in 1873, charges €9.22 per square meter, and rakes in more than €100 million per year.

Mineral water gets taxed several times before winding up on your table at the café. First, it gets hit by a €0.54 per hectoliter tax on non-alcoholic beverages. Next, there is a €0.58/hectoliter tax on mineral springs that goes to the municipality where they are located. After that, they get hit by the reduced TVA for non-alcoholic beverages, 5.5% if it’s still in the bottle and 10% if it’s already in the glass. Maybe that’s how they justify charging so much for a bottle of Perrier…

Hidden within the price of your ticket to the show is a 10.72% tax (16.02% on films limited to audiences that are at least 18) that goes to supporting the French film industry, redistributing funds among industry professionals, and modernizing theaters. At the same time, movie tickets benefit from the reduced TVA of 5.5%, so it just about evens out.

Feel a pressing need to text in and save your favorite contestant on Les Princes de l’amour? You should probably know that in addition to paying the network, NRJ, you’ll also be paying an additional tax to the state. Premium-rate phone numbers (like those used for voting for candidates on reality TV shows, or having an intimate chat with an adult friend) are subject to a surtax of 9.5% and text messages.

Broadcasters must pay a tax of 5% for the right to show sporting events on television, funds that go to the National Center for the Development of Sport. Since large-audience sports like football and rugby pull in most of this money, they end up financing less well known sports, like, say, pétanque. Shuttle boats ferrying visitors to islands that are protected as nature reserves are hit with an additional 7% tax, on top of the TVA. In order to escape it, avoid the tourists and visit outside of the June 1st and September 30th window when the tax is in effect.

No pity for those going on ski trips in the Alps: since 1985, skiers have been subject to an additional 3 to 5% tax on ski lift tickets, depending on the location. When the government recently considered doing away with the tariff, they were met with an uproar on the part of elected officials whose communities benefit from the growing revenues they raise, and it was decided that the tax would stay in place.

The ski lift tax was not the only one targeted for elimination by Prime Minister Edouard Philippe’s government, however. His Finance Minister, Gérald Darminin is looking to cancel a number of miscellaneous taxes that raise less €150 million per year, a process that can be expected to continue throughout 2019.

Know an interesting fact about France or the French that you’d like to see published? Write to us at [email protected]com.