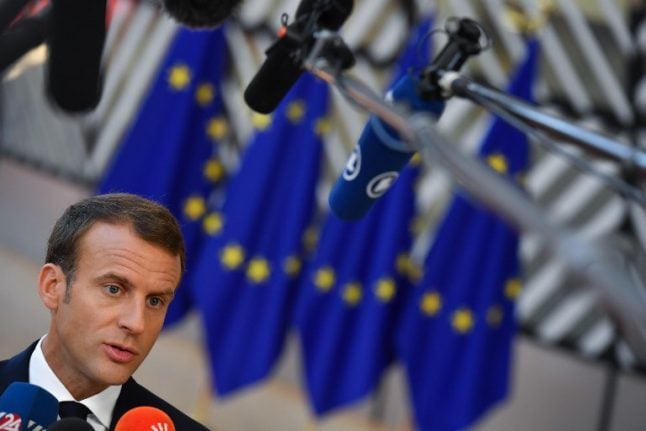 In an opinion piece, to be published by several European Union newspapers, Macron also renewed his call for greater security cooperation and stressed the need for a common asylum policy to deal with the migrant crisis.

“Never since the Second World War has Europe been so necessary. And yet never has Europe been in such a danger,” Macron said, in what many see as the start of his own campaign for the May European Parliament elections.

He listed a series of initiatives the EU could take both to defend itself and to adhere more closely to its core values.

“A European agency for the protection of democracies would provide European experts to each member state to protect its electoral process against cyber-attacks and manipulation,” he suggested.

Financing European political parties from abroad should also be banned, while rules should be agreed on banning “hateful and violent speeches from the internet”, he added.

In January, Macron had suggested that the Brexit campaign — which saw Britain vote to leave the EU — was “manipulated from the exterior by a lot of what we call fake news”.

Brexit a symbol of Europe's crisis

Brexit, he said, was the “symbol of Europe's crisis in not being able to provide for the people's need for protection in the face of today's” threats.

“Who told the British people the truth about their post-Brexit future?” Macron said. “Who spoke to them about losing access to the European market. Who mentioned the risks to peace in Ireland of restoring the former border. Nationalist retrenchment offers nothing. It is rejection without an alternative.”

He added: “The Brexit impasse is a lesson for us all” and hinted that he believed Britain would one day return to being a close part of the EU.

“In this new Europe, the UK, I am sure will find its true place.”

Macron, who has made no secret of his plans to form a centrist, pro-Europe alliance to stave off populist and nationalist movements which have been gaining ground across the continent, also suggested reforming the 26-member Schengen area which allows free movement between members.

All those who want to belong to Schengen should accept both stricter controls on outer borders and a common asylum policy for migrants, he said.

A number of eastern European EU members, included those run by right-wing governments in Poland and Hungary, have rejected previous calls to take in a share of the migrants arriving from the Middle East and Africa.

Macron suggested Europe should also share a common border force, along with a joint office for dealing with asylum demands.

Warning citizens against the threat of accepting the “status quo” in Europe he urged them to seek change while preserving shared values.

A “conference for Europe”, involving “citizen panels”, could be held “to put forward all necessary changes to our political undertaking, with no taboos, not even that of revising treaties,” he said.

He also urged negotiating a new “treaty on defence and security”, and setting up a European security council that would include Britain to promote collective defence initiatives.

In a speech in September 2017, Macron called for greater security cooperation in Europe and a common asylum policy.

But his ideas, until now, have met only lukewarm support from Germany's leader Angela Merkel, while sparking outright opposition from right-wing government leaders in Italy, Hungary and Poland.

Since then he has sought to liberalise the French economy, but this has sparked grassroot opposition with three-months of mass demonstrations by “yellow vest” protesters.