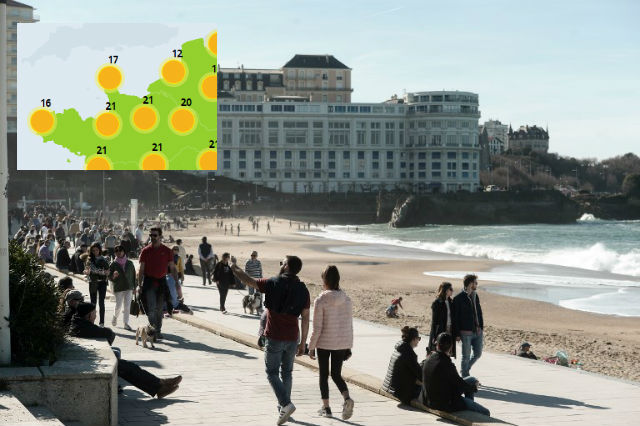 Photo: People enjoying the warm winter weather in Biarritz, AFP
The mercury is set to reach a whopping 28C in the south west department of Landes on Wednesday as France's warm spell continues, according to France's national weather agency Météo-France.
The rest of the country is also expected to see the mercury shoot up, with numerous cities around France predicted to break temperature records.
This continues a trend of record-breaking temperatures over the past few days: Lille hit 19.3C on Tuesday, topping the previous high of 18.9C on February 28th, 1960, while in Toulouse, the mercury reached 22.3C, slightly above the previous record of 22.1C reached on February 24th, 1990. Photo: Meteo France
In Paris, temperatures hit 19.3C on Tuesday afternoon, making it the warmest February 26th on record, easily surpassing the 1959 high of 17.6C. It was the tenth day this month with temperatures of at least 15C, which has not been seen since weather records began in Paris in 1873.
The warmest place in continental France, however, has been Saint-Jean-de-Luz in the Basque Country, where temperatures reached 26C on Tuesday – higher than the August average and 12C above readings typical of late February.
High temperatures have been the result of a powerful anticyclone dominating Western Europe that keeps skies relatively cloud-free. These clear skies will also lead to February’s sunshine record being broken throughout northern France within the next few days, say meteorologists.
The rest of Western Europe has benefited from the gentle weather as well: the United Kingdom saw its February and winter temperature records broken, and parts of Spain, Belgium, and Denmark also recorded record highs.
Conditions will likely begin to change on Thursday as the high-pressure anticyclone retreats and is replaced by rain coming in from the English Channel and moving towards central France. The weekend is expected to be intermittently rainy, with snow arriving at higher altitudes.