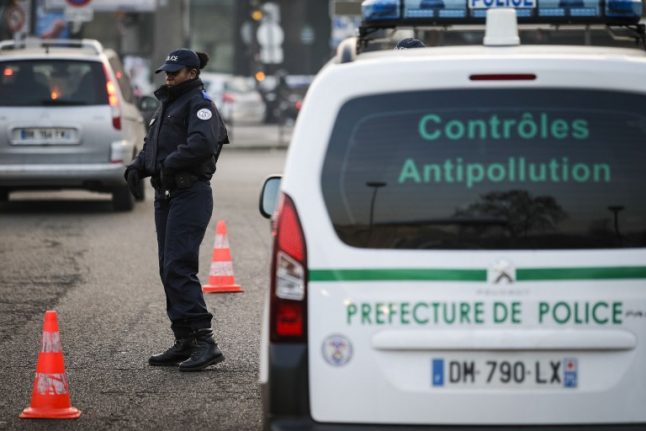 Photo: AFP
French authorities have taken the precaution of reducing speed limits in the greater Paris region of Ile-de-France, the eastern Rhone department and northern departments of Nord and Pas-de-Calais.
In the Ile-de-France, the police have reduced the speed limit by 20km/h on roads where drivers can usually travel at speeds of 90km/h, 110km/h and 130km/h.
Roadside checks have been set up to ensure that motorists are respecting the revised speed limit due to a spike in pollution over the past few days even though air pollution levels do not currently exceed the alert threshold.
On top of that the most polluting vehicles, those carrying Crit'Air 4 and 5 stickers, will be banned from driving in Paris and the surrounding suburbs on Wednesday.
Between 5:30 am and midnight, only vehicles with Crit'Air 0 to 3 stickers will be allowed to travel in this area. Air quality has been particularly bad in Lille (pictured above) during the current spike. Photo: AFP
Because of this episode of pollution, the City of Paris decided to make residential parking free on Tuesday to encourage motorists to leave their cars at home and use public transport or non-polluting transport.
Limits have also been lowered by 20km/h in the Rhone department on roads where the speed limit is usually 90km/h, 110km/h and 130km/h and by 10km/h on the roads where the speed limit is usually 80km/h on Tuesday at 5am.
The air is “very bad” above the city of Lyon, according to reports.
In the Nord and the Pas-de-Calais departments, the maximum speed limit has been reduced by 20km/h on roads where the limit is usually 110km/h and 130km/h due to the fact that the concentration of fine particles in the air “could exceed” recommended levels on Tuesday.
This measure will remain in place until Wednesday at 10pm.
The air quality is particularly bad in Lille and Dunkerque in the Nord department and Bethune, Calais and Lens in Pas-de-Calais, according to authorities.
If the air pollution gets worse on Wednesday, the Nord department plans could ban highly-polluting vehicles from the roads altogether.
From tomorrow in Lille, as in Paris, only the least polluting vehicles will be able to hit the roads.
Only vehicles carrying Crit'Air stickers 0-3 will be allowed on the roads while category 4 and 5 vehicles will have to leave their vehicle at home.