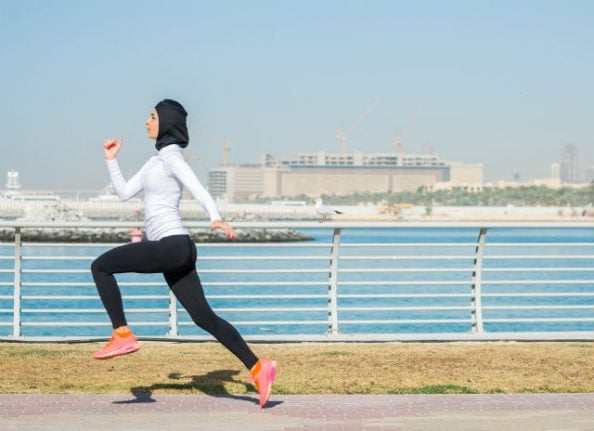 Photo: oneinchpunch/Depositphotos
“We are effectively taking the decision to not sell this product in France for now,” Decathlon official Xavier Rivoire told the RTL broadcaster, despite defending to AFP earlier the company's goal to “make sport accessible to all women in the world.”
The controversy is the latest in France over face- and body-covering garments worn by Muslim women which many in the secular country perceive as instruments of women's subjugation.
Others argue that they allow Muslim women to be an active part of broader society.
France in 2004 banished the hijab, which covers the hair but leaves the face open, from the classroom and government offices, but it is a common sight in the streets. Photo: Depositphotos
In 2016, the country with Europe's largest Muslim population was deeply divided over the appearance on beaches of the body-concealing “burkini” swimsuit.
French retailer Decathlon already sells the runner's hijab in its stores in Morocco, and had planned to introduce the garment to France in the coming weeks.
“The craze for the product (in Morocco) made us ask whether to make it available” in other countries too, said Rivoire, adding the garment “leaves the face free and visible.”
Angelique Thibault, who created the garment for Decathlon's Kalenji running brand, said she was “motivated by the desire that every woman should be able to run in every neighbourhood, every city, every country… regardless of her culture.”
Reports that Decathlon would introduce the sports hijab to France, however, raised public ire. Screenshot/Decathlon
Such a product is “not forbidden by law,” Health Minister Agnes Buzyn responded on RTL, but “it is a vision of women that I do not share. I would have preferred that a French brand not promote the veil.”
Aurore Berge, spokeswoman for President Emmanuel Macron's Republic on the Move (LREM) party added that “sport emancipates, it does not suppress,” lambasting “those who tolerate women in a public space only when they hide themselves.”
Several political leaders called for a boycott over the issue.
Decathlon posted a Tweet on Tuesday detailing how its workers had been subjected to aggressive behaviour.
“Our customer service team has received over 500 calls and emails since this morning. Our teams in our stores have been insulted and threatened, sometimes physically,” said the tweet (see below).
Along with the tweet were examples of the kind of email they have received, including one in which the sender asks if Decathlon plans to start “selling explosive belts” and another calling them “traitors to the values of France”.

And some politicians defended the French sports store, including France's Sports Minister Roxana Maracineanu.
“My role is to promote sport for all in terms of progress, of inclusion, of respect for others and of diversity,” she said. “For all these reasons, I want to fetch women, mothers, young girls wherever they are and as they are, to encourage them to practice sport because I am convinced that it is a powerful tool for emancipation.”
Similarly Justice Minister Nicole Belloubet pointed out that Decathlon's plan to sell a sports' hijab were not against the law.
“We became hysterical over the subject and I regret it,” she said in an interview with BFM TV. “If the law is being respected, I have no other comments to make.”
Some saw the store's cancelling of the sports hijab as revealing of the level of Islamophobia in France.

“I think it's sad,” said sociologist and documentary film maker Agnes de Feo. “A brand has been forced to give in as a result of racists.
“The only positive point is that this collective hysteria has been exposed and no one can deny that Islamophobia exists in France,” she added.
Meanwhile, US sportswear group Nike offers a hijab for women in black, grey, or white for 30 euros ($34).