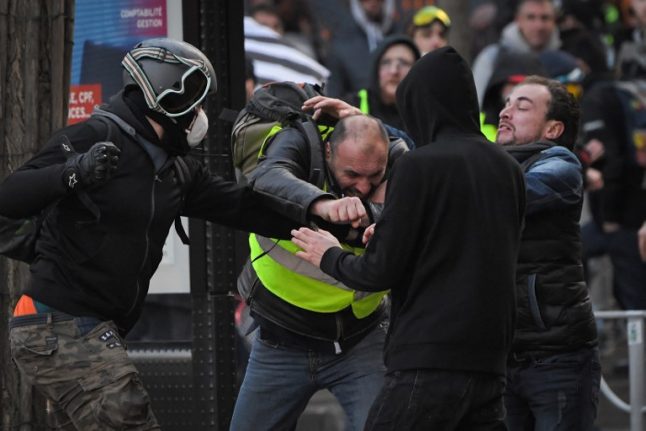 “Those who join violent demonstrations are complicit with the worst,” he told a meeting of legislators from eastern France.

“It's a miracle that after so many Saturdays marred by violence there have been no deaths resulting from police action,” he added.

Eleven people have died since the Saturday protests began in November in reaction to increasing fuel taxes.

All but one were involved in traffic accidents associated with road blockades put up by “yellow vest” protesters.

In the southern port city of Marseille, a woman in her 80s died in hospital in December after being hit in the face by a tear gas canister fired by police during a demonstration.

Authorities said her death was linked to “post-operative shock” rather than the injury itself.

France has been rocked by the images of scores of burning cars and ransacked businesses during the initial protests, when thousands of rioters staged running street battles with police in Paris. And while violence has subsided, sporadic clashes still erupt, notably in the provinces, each Saturday.

On Monday, an Odoxa poll found that 55 percent of French people now want the protests to stop.

This compared to 66 percent of them supporting the protests at the beginning.

But Macron rejected calls by some legislators for stronger action against protesters.

“We cannot, reasonably, ban demonstrations… but there needs to be a clear message from everyone” against violence, he said.

“I believe that today it is time for debate, for a democratic response, and then a response through the polls. But we cannot be a democracy of rioting,” he said. In addition to pledging financial assistance to low-income households, Macron has launched a series of townhall debates to canvass public opinion on what reforms they would like to see implemented.

On Saturday around 47,000 protesters again demonstrated across France against Macron and his pro-business policies, accusing him of ignoring the daily struggles of people in rural and small-town France.

Some 2,000 protesters and 1,000 police have been injured since the start of the demonstrations on November 17, according to the interior ministry.

The Council of Europe rights group on Tuesday urged France to halt the use of rubber bullet launchers blamed for dozens of injuries to protesters.

France is one of few European nations to use so-called defence ball launchers, known by the French abbreviation LBDs, which shoot 40-millimeter (1.5 inch) rubber projectiles that are considered non-lethal.