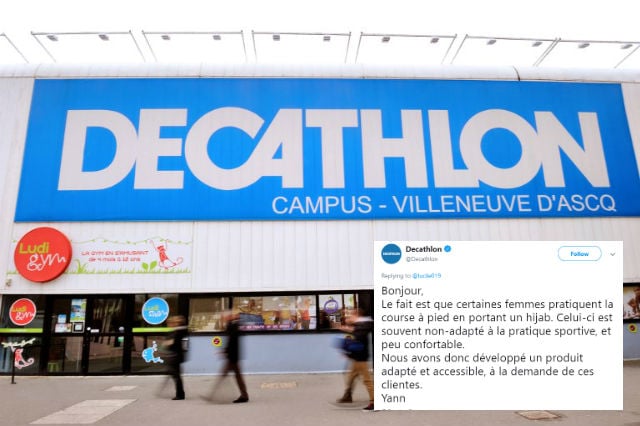 The French retailer's plan to sell a sports hijab has been greeted with much public ire in France and as a result the social media team have had a lot on their plates.

A deluge of comments, including some claiming the company's move was akin to supporting terrorists or complicit with women's oppression, have been directed at Decathlon's social media accounts.

One of the community managers, Yann, 27, who deals with the brand's Twitter, Facebook, Instagram, Snapchat and Youtube accounts has been praised for handling aggressive comments from the public and politicians alike, with at times direct, calm and logical responses.
READ ALSO: Photo: Depositphotos
For example in the tweet below Yann responds to one woman who compares running in a hijab to running in chains, by saying: “Hello, the fact is that some women practice running while wearing a hijab, often ones which are unsuitable for sports, and uncomfortable. We have therefore developed a product adapted and accessible, at the request of these customers. Yann”

Another person who tweeted the following at Decathlon: “What hypocrisy!!! Shame on you DECATHLON!!! Profiting from the jihadists who murdered in our country… It is disgraceful and criminal…” also received a response from Yann.

“What is disgraceful is to conflate things with the sole purpose of conveying a message of hatred. From our perspective, we prefer to focus on making sport accessible to all women, regardless of their religion or culture.”

“My choice as a woman and citizen will be to no longer trust a brand that breaks with our values. Those who tolerate women in the public space only when they are hiding are not lovers of freedom,” said Bergé.
In response Yann wrote: “Hello, From our perspective, we focus on the democratization of practicing sport. The fact is that some women run with a hijab, often poorly adapted to the activity. Our goal is simple: to offer them a suitable sports product, without judgement. Yann”
Yann has been praised by many on the web for his skill at dealing with the ire directed at his employer, with one person writing “Go Yann! GO!” over his response to Bergé (see below).

One person even suggested Yann should be put in charge of resolving the conflict between Israel and Palestine.

“Motion to appoint Yann from Decathlon to be in charge of Palestine-Israel diplomacy, never seen anyone so calm and professional in the face of insults.”

Another praised him as “the BEST CM (community manager) of the Year” with the hashtag “YannPresident”.

The BEST CM of the Year #Yann #Decathlon #YannPresident pic.twitter.com/0qDb4XCNDT

And one person tweeted that he could take on Marine Le Pen, the leader of the far-right head of the former far-right Rassemblement National party (formerly the National Front) next.

GET READY FOR THE NEXT BATTLE !#Yann #Decathlon VS #MLP #RN pic.twitter.com/tRHLYgXgHf

Decathlon posted a Tweet on Tuesday detailing how its workers had been subjected to aggressive behaviour.
“Our customer service team has received over 500 calls and emails since this morning. Our teams in our stores have been insulted and threatened, sometimes physically,” said the company, which cancelled its plans to sell the controversial sports hijab on Tuesday.