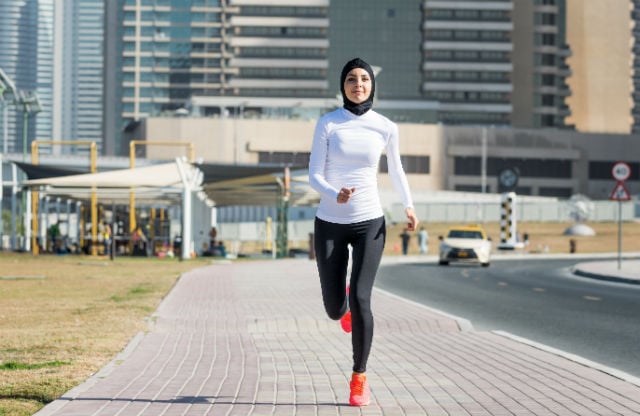 Decathlon announced on Tuesday its plans to release the sports hijab garment (called hijab de running in French ) in France in March, following an initial request by its female customers in Morocco, where the product is already being sold.

The French sports equipment manufacturer follows in the footsteps of other brands such as H&M, Uniqlo and Nike, all of which have incorporated Muslim garments for women into their clothing lines.

But in France, the country that saw an almighty row over the burkini in the summer of 2016 after several right wing mayors banned women from wearing the garment on the beach, Decathlon’s decision has been met by criticism among the country’s political sphere.

“Obviously their decision is legal as French secularism laws allow for the veil to be worn but it isn’t a vision for women that I share,” she added. A 2011 law banned full-face covering in public spaces in France, which meant Muslim garments such as the niqab and the burka were outlawed but the hijab, which allows women’s faces to be visible is only banned in schools and state buildings. “I’ve got two daughters who don’t want to live in a country where women’s place in society regresses in the same way as in Saudi Arabia,” Dupont-Aignan tweeted.

“I’m calling for a boycott of the Decathlon brand for promoting this type of clothing.”

French feminist associations have joined the debate by condemning Decathlon’s hijab for runners, arguing that it promotes “sexual apartheid”.

“Decathlon has submitted to the type of Islamism that only tolerates women's head being covered with a hijab to ensure their membership in the Ummah (Islamic community) and their submission to men,” tweeted Algerian-born Lydia Guirous, a former member of Sarkozy’s cabinet and another outspoken feminist commentator.

The new row echoes a similar flare up over the burkini swimwear in France in 2016.

In the summer of 2016 France's highest administrative court the State Council (Conseil d'Etat) set a precedent when it overturned a ban on the burkini swimsuit brought in by the town of Villeneuve-Loubet.

Just as in 2016 some believe the reaction over the sports hijab, especially from politicians, does not reflect well on France.

“The situation over a running hijab demonstrates the atmosphere in France and the collective hysteria that exists here,” Agnes de Feo, a sociologist and film-maker who specialises in Muslim women, told The Local.
“On one hand it's a good thing because it shows the racism Muslim women are subjected to here.
“Now we have have proof of what France is like,” she said, adding that it also showed the sexism and misogyny behind attempts to curb the wearing of the hijab.
“It is an attempt to take choice away from women even by politicians — people with power and responsibility who are supposed to be respectable. They take part in this total rejection of the veil and make it acceptable for others to do the same.
“Muslim women are subjected to physical attacks for wearing the veil and this situation is accepted and encouraged by French politicians.”

So far, the French sports goods retailer has stuck by its guns and defended its decision to sell the religiously-themed garment.

“Decathlon’s goal as an apolitical and secular group is to democratize sport wherever possible and make it available to everyone, including all women in France,” Xavier Rivoire, Decathlon’s communication manager, told Le Parisien.

According to Decathlon, the polyester garment has been tried and tested by 20 women who habitually wear a hijab.

The sports veil will reportedly give female runners “extra comfort and breathability” whilst still “covering their neck and heads”.