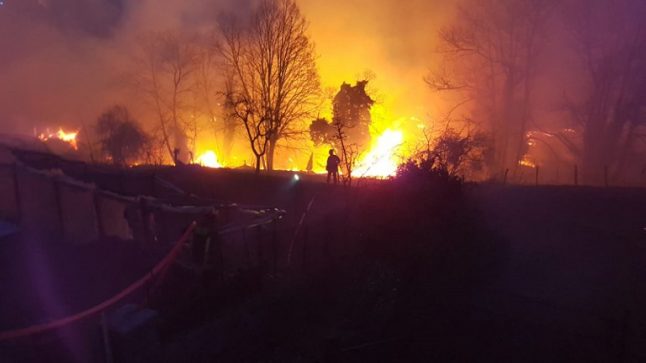 Officials in Corsica on Monday blamed “irresponsible” stubble burnings which got out of control in high winds for a series of wildfires that broke out on the French Mediterranean island over the weekend.

Around 150 firefighters were still mobilised against the largest blaze near Calenzana in the northwest, which has burned around 1,200 hectares (3,000 acres) so far.

Some 1,500 hectares in total have been burned in at least two dozen fires since Saturday, when officials had warned of high winds gusting at up to 90 kilometres (55 miles) per hour.

Many spread quickly on rocky terrain which had received little rain in recent weeks, officials said, requiring authorities to call in planes to dump fire retardant in areas they couldn't reach by road.

The planes were expected to be necessary for several more days to bring all the fires under control, a regional government representative, Josiane Chevalier, said.

Firefighters were also being helicoptered in on Monday morning to hard-to-access areas.

But most blazes were under control or no longer considered a threat to homes or other property by Monday afternoon, fire officials said.

The island has banned all outdoor burning, with Chevalier blaming “careless and irresponsible” people for ignoring the restrictions on controlled brushfires.

“Even on Sunday, people who knew about the fires were still burning all sorts of stuff,” Chevalier told France Info radio.

“We can't make a decree against carelessness,” she said.

Other fires were near Sisco, on the island's northern tip; in the centre near Ghisoni and Sampolo; and near Ocana in the vicinity of Ajaccio, in the southwest.