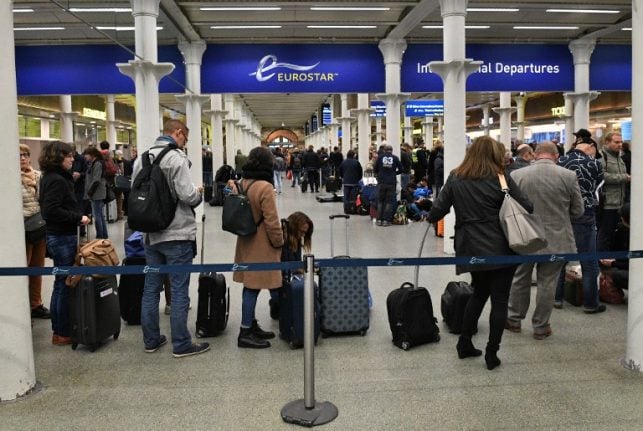 File photo: AFP
Guillaume Pepy said there would be some “details” to iron out pertaining to cross-border formalities even if Britain does leave the European Union without a deal on the March 29 deadline.
However, he said that the “fundamentals to run Eurostar are there even if there is no deal.”
There have been fears that a no-deal Brexit might see existing licences for UK train operators providing services in continental Europe lose their automatic validity.
But Pepy said he could reassure customers.
“Things are now very, very concrete so that, whatever the (exit) scenario, Eurostar will be able to travel correctly,” Pepy told reporters in Paris.
“We are well aware that the devil will be in the details so we are working on the details,” he said, adding some minor issues would nevertheless require attention in the coming weeks.
“And then, in concrete terms, we shall have to see how things are organised at Gare du Nord (in Paris) and Saint Pancras (in London) regarding identity and customs checks.”
He added if such controls brought delays then train officials would need to assess “if we hold back the train a few minutes or send people on their way in the following train.”
On Thursday the Financial Times reported aspects of a confidential British government report alluding to fears of a backlog of as many as 15,000 people at the Saint Pancras terminal which could affect timetables.
SNCF has a 55 percent stake in Eurostar with Quebec's pension and insurance plans institutional investor CDPQ holding a further 30 percent.
British investment management firm Hermes Infrastructure has a 10 percent stake with five percent held by Belgian railways.