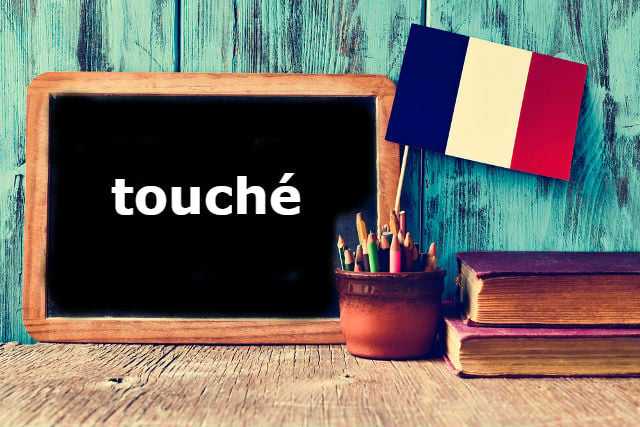 Why do I need to know touché?

So you know that this word means very different things in English and French.

Touché is the past participle of the word toucher, which means ‘to touch’ as a verb and refers to one of the five senses when used as a noun.

But English speakers use it to acknowledge a particularly effective counter-argument or comeback in a battle of repartee or “banter”, as some would say.

In an argument in English, touché is often used to recognize that the other person has made a good, clever or funny point that cannot be refuted or has no comeback.

This use of the word has its roots in the sport of fencing, and signaled that one of the competitors had been struck, or ‘touched’, by the other (much of fencing’s vocabulary comes from French – ‘en garde’ or ‘riposte’, for example).

In fencing as in arguing, it signals that one’s adversary has scored a point.

How do I use touché in French?

In everyday French conversation, it’s unlikely that you’ll hear touché used in this way, unless you’re actually fencing. It does, however, have some figurative meanings besides the obvious physical one that you should be aware of.

For instance, one can use touché to say that something has affected them emotionally, or moved them, similar to the use of ‘touched’ in English, as in :

Ça m’a touché – ‘That had an emotional impact on me’ or 'It really moved me'.

Another common figurative use of the verb toucher occurs when one talks about receiving or winning a certain amount of money.

For example, just as one might ‘hit the jackpot’ in English, they would similarly touche le jackpot in French.

And someone who ‘gets a bonus’ for a certain achievement would touche une prime:

This works with almost any monetary situation, like: toucher une bourse – ‘ to get a scholarship’ – or toucher une indemnité, ‘to receive compensation’ (for damages, injury, etc.).

Hopefully, you’ll have a chance to use toucher in this sense in the near future…