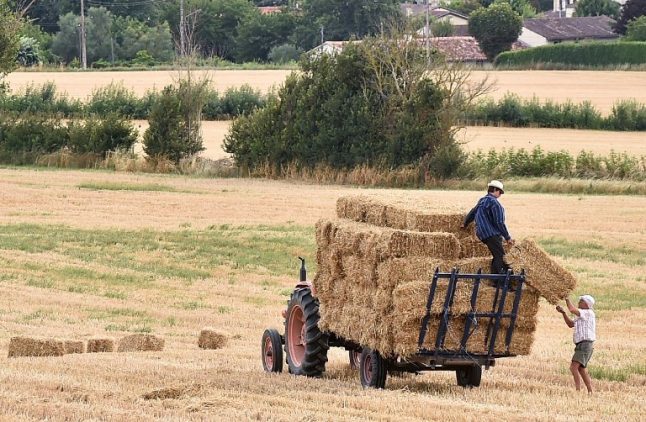 Photo: AFP
Twenty years ago, there were two small dairy farms in my hamlet in Normandy. There were ten farms, big and small, in my commune in the hills 20 miles south of Caen.
There are now no farms in my hamlet and only four farms in the commune. One of the remaining farmers will retire this year. His land, mostly rented, will be split up between larger holdings.
Much the same pattern can be observed all over France. There are 460,000 French farms in 2019, compared to 750,000 two decades ago.
Fine, you may say. Such developments are healthy and inevitable. French farming is adjusting to the economic realities of the modern world. French President Emmanuel Macron at this year's Salon de l'Agriculture. Photo: AFP
Is it?
Despite the holocaust in farm numbers and a doubling of farm sizes in the last two decades, two out of five French farmers earn less than €4,320 a year. Without their subsidies from Brussels, tens of thousands of them would make a loss.
A farmer commits suicide somewhere in France every two to three days. One quarter of French farmers is unmarried or has no romantic partner – double the rate in the rest of the population.
French farming’s great annual showpiece, Le Salon de l'Agriculture, ends in Paris next weekend. Crowds of people will flock to the Porte de Versailles to admire the champion Limousin and Charolais cattle, to drink the world’s greatest and most varied wines and to nibble the world’s most numerous types of cheese.
President Emmanuel Macron spent 14 hours – yes, 14 hours – wandering around the different stands on Saturday listening to the anxieties of farmers from Provence to the Pas de Calais. He told them that he was a “patriot for French agriculture”.
He promised that his government would fight off threatened, post-Brexit cuts in the European Union farm policy. He said that he would help farmers cope with the problems of climate change and concerns about pollution of food and rivers by agricultural pesticides and herbicides.
Many farmers and farm leaders said that they were impressed by the president’s grasp of their subject. He was booed comparatively little. It is a curious fact that the Gilets Jaunes movement, although rooted in rural and outer suburban France, has relatively little support among farmers.
So what is ailing French agriculture? It has some of the finest soils and climates in the world. It has a reputation for great food quality and variety. It receives €7.35bn in EU subsidies each year, more than any other country. A young farmer stands next to her cows during the International Agriculture Fair (Salon international de l'Agriculture) in Paris. Photo: AFP
Where each French farmer fed 15 people in 1979, each farm now produces enough food to feed 60. “We feed people but farming doesn’t feed us,” said Philippe Grégoire, a dairy farmer from Maine-et-Loire.
There are several explanations for France’s agricultural malaise, not all of them exclusive to France.
Consumer tastes and habits have shifted away from meat and dairy. Farmers in all European countries are suffering from a price squeeze by supermarkets. They have had to face the progressive abolition since the 1990s of the guaranteed farm-gate prices once offered by the EU’s Common Agricultural Policy (CAP).
France, Europe’s greatest agricultural powerhouse, is suffering more than most. Other countries, especially Germany, have responded by encouraging consumer-led specialisation.
Successive French governments have pursued a schizophrenic, or some would say hypocritical, approach. They have paid lip-service to “family farms” and “food quality”. They have shovelled most of the replacement EU subsidies towards the big cereal farms and the large agri-food industries which make France one of the world’s largest mass exporters of food.
The biggest French farm union, the Fédération Nationale des Syndicats d’Exploitant Agricoles (FNSEA), has traditionally been dominated by the big cereals interests of northern France. It has resisted – as have most French governments – any radical shift in EU acreage-based subsidies away from large farms to small.
Many French farmers have never swallowed the demise of the EU “intervention” system which gave them guaranteed prices for beef and milk, whatever the quality and whatever the level of demand. Remember the old butter and beef mountains?
They remain fixated on the need for higher farm-gate prices. They have done less than farmers in other countries to bring down their costs. Pascal Viné of Coop de France says that four fifths of French farmers have little idea of what their input costs are. They can vary by 50 per cent between two farms of the same size. A farmer parades with cows at the Buttes Chaumont in Paris on the eve of the opening of the International Agriculture Fair. Photo: AFP
Many French farmers, he says, still regard themselves as “exploiters of the land”, who have a mystical right to exist. They have not grasped that they need to become “enterprises” with the same concerns for quality and customers as other businesses.
Most big cereals farms are still doing fine. Farms which have controlled their costs and concentrated on quality produce are doing well. Dairy farmers have been given some relief by a new, fairer deal from the supermarkets.
But a great swathe of French farmers, especially older farmers, are suffering. They look to government and Brussels for their salvation.
The European Commission announced last year that, post-Brexit, it needed to cut the CAP budget by 5 per cent from 2021. France has vowed to reverse this policy.
President Macron promised at the weekend that he would fight for a “new CAP”. Many farmers took this as meaning that he would push for a return to the old guaranteed price system. If so, they are doomed to disappointment.
The old butter mountain CAP will never return, nor should it. In its post-2021 proposals, Brussels wants to shift remaining farm subsidies away from the big battalions towards direct aid for smaller, specialised farms which produce quality food and respect the environment.
Such changes might be excellent news for French farming, if the government and the biggest farming union would only abandon their allegiance to the mass production of pesticide-assisted cereals.