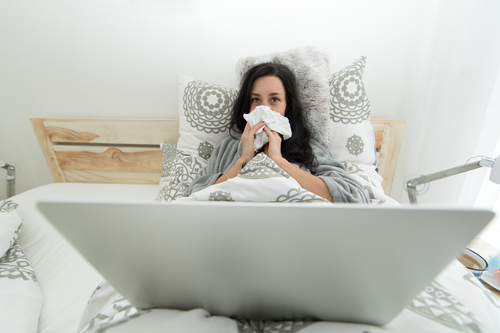 In 2017 the average private sector employee in France took 17 days of sick leave, a rate that’s increased by a day in three years and that costs La Sécu, France’s social security system, up to €10 billion a year.

“It’s as if our country had introduced an extra day off,” French Prime Minister Edouard Philippe said of the issue.

A new report presented to l’Elysée on Wednesday lists some remedies to mend the trend with suggestions that may raise a few eyebrows but also appease others.

Here are the main proposals of the report. The government will now decide whether it wants to implement the measures.

The plan is to find a third avenue between doing no work at all and having to graft if one is indeed unwell.

It may seem straightforward to some, but according to the authors of the study making sure “teleworking” (télétravail) is recognised as an official alternative to the regular system of sick leave could save millions.

“The system is currently too binary. Doctors should be provided with options such as offering employees ‘work from home’ prescriptions, as an alternative to the average doctor’s note suggesting total or partial rest,” reads the report.

So workers in France could soon be asked to work from their sofas or even their sick beds when they are unwell.

This may suit workers who don't want to miss out on pay. The basic legal cover in France means when workers are off sick they have to go without pay for the first three days and you are generally required to have a doctor's note saying you are sick from day one. Although certain companies will cover these three days.
After those initial three days the worker's salary will be covered by the social security up to a maximum of €44.34 a day.

Helping people on long-term sick leave get back to work

One of the added advantages of teleworking is that it will prevent employees on longer periods of sick leave from “running the risk of dropping out of professional life”, the study reads.

The authors also suggest that companies offer workers with ongoing illnesses or conditions more possibilities in terms of part-time work, as an alternative to stopping work outright.

“After 6 months of stopping, it's difficult to get back to work. After a year it's over, done,” said Jean-Luc Bérard, one of the experts behind the study.

Perhaps the most controversial of the proposed measures is the introduction of an extra day of contractually agreed unpaid sick leave.

Many private sector companies in France don’t pay employees for their first three days of sick leave, referred to as jour de carences, whereas other businesses continue to pay their off-duty workers nonetheless.

Under this measure, employees would be able to use the extra day in the eventuality of them of being ill, but it would mean one day less of pay.

When Prime Minister Philippe first brought up the proposal in November 2018 the head of France’s CGT workers union slammed it by saying it implied those on sick leave were “faking it or lazy”.

The proposal is in particular a hard pill to swallow for private sector employees who have to claim back their sick leave from La Sécu if their company doesn’t cover the jours de carence.

For workers in France to accept the new proposition, the authors suggest that the principal of subrogation de salarie, whereby a company pays the employee and then claims it back from the social security system, is introduced across the board in the private sector.