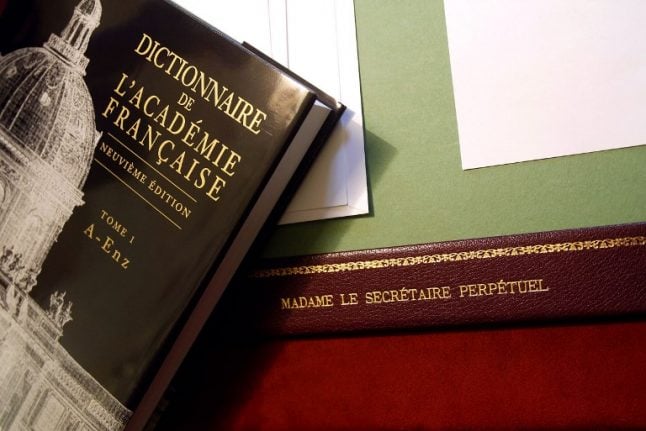 Even the job title Madame le Secretaire, given to the Academy's first female secretary general in 1999, is testament to this linguistic dilemma. Photo: AFP

For years France’s leading body on the French language the Académie Française has been fighting off calls to include feminine versions of job titles in its dictionaries, under the premise that it would “lead to proposals contrary to the spirit of the French language”.

But with the launch of its first online dictionary on February 19, the language police,as they are often referred to, have yielded and will now include “feminised” versions of such occupations alongside the longstanding masculine nouns.

They argue that their previous reluctance was primarily due to the fact that the wrong feminine versions were being used.

For them, the incorrect use of unofficially coined feminine job nouns such as professeure (instead of the only approved and masculine version professeur), recteure (feminine for superintendent), ingénieure (f. engineer) and procureure (f. prosecutor) “are contrary to the rules and are real barbaric acts”.

According to Hélène Carrère d'Encausse, who in 1999 became the first woman to be made a permanent secretary of l’Académie, even her job title Madame le Secretaire is testament to this linguistic vacuum.

“There’s terminology that just comes into use. The French Academy’s general position is that a job function isn’t attached to a person,” she told L’Express, alluding to the fact that whether the word is masculine or not shouldn’t matter in the end.

SEE ALSO: The French language is in 'mortal danger', say its own panicked guardians But there are other voices such as that of linguist Bernard Cerquiglini who say that the institution – first established in 1634 – has conceded because “their model no longer holds up”.

“The word autrice (a female author) for example isn’t a neologism, it’s been around since the 16th century,” he told L’Express.

“It wasn’t until the 17th century that women began to be excluded from certain occupations and were relegated to the kitchen.”

“I think that many members of the Academy understood that they could not stick by a modus operandi that is in fact misogynistic”.

According to Cerquiglini, author of a book on the longstanding debate surrounding the feminisation of words, other female versions such as ambassadrice, the female version of ambassedeur, went from referring to a female ambassador to meaning the wife of the ambassador.

For the most part these newly included feminine versions in L'Académie's online dictionary are easily formed by just adding an –e or –ne to the end of the masculine version, such as préfèt/e, informaticien/ne, deputé/e or procureur/e.

Others feminine job titles require the suffix “trice” to be added to the end, such as acupuncteur/acupunctrice.