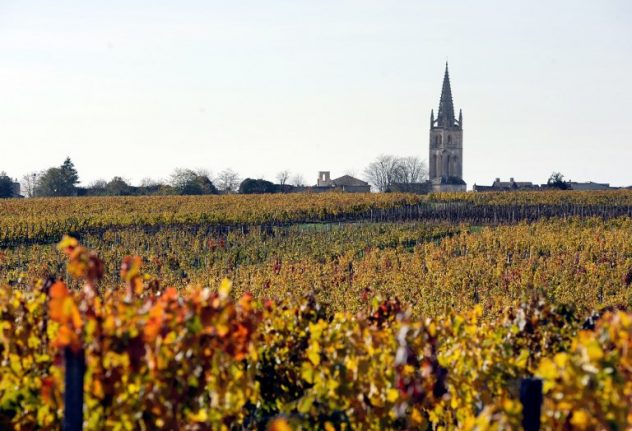 Photo: Jean-Pierre Muller, AFP
The Nouvelle-Aquitaine is France's biggest administrative region and more Brits have made their home there than in any other part of France with an estimated 39,000 living there (see map below).
But that's not the only reason Brexit is likely to have a huge impact in the area.
When the British parliament massively rejected Theresa May's Brexit deal last month, UK supermarket Tesco chairman John Allan sarcastically commented that Britain would have no problem in coping with a no-deal, provided it is ‘happy to live on spam and canned peaches’.
In the Nouvelle-Aquitaine especially – which exports millions of euros worth of wines and food to the UK each year – Allan's comments might have felt a little too close to the bone.
His words came amid a flurry of warnings from UK businesses about how a no-deal  – which looks increasingly likely – would harm British industry. But with less than five weeks to go until Brexit, businesses in Nouvelle-Aquitaine are also holding their breath.
READ ALSO:
How the British have made south west France their home Today, the UK is the region's fifth largest trading partner and the region's trade surplus with the UK – €869 million  – is the third biggest when compared to other countries.
A recent report from the Ministry of Agriculture and food shows that in 2015, Nouvelle-Aquitaine exported over 1.5 billion euros worth of goods to the UK, which left it ranked behind the United States, Spain, Germany and Italy as the biggest receiver of goods from the region.
Top of those exports are the region's famed alcoholic drinks, which obviously include Bordeaux wines and Cognac, which accounted for 422,9 million euros worth of exports over 12 months.
Brits are enthusiastic consumers of Bordeaux fine wines and spirits. They are the third biggest importers of expensive regional wines such as Saint Emilion, Médoc and Pessac-Léognan, and Europe's biggest importers of Cognac.
But Brits are even bigger fans of the cheaper Bordeaux wine variety with two thirds of the volumes exported being  wines costing less than 4 euros per litre.
Second and third in terms of exports to the UK are other foodstuffs and products from the agrifood and paper and forest industries, which totaled 137 millions euros and 103,4 million euros in 2015 respectively.
The economic fallout from a no-deal Brexit goes both ways: Nouvelle-Aquitaine also imports 660 million euros worth of goods every year from the UK which is its tenth biggest supplier.
A no-deal Brexit could certainly lead to a number of damaging consequences for French businesses and France has never made any bones about the fact it would prefer the UK to stay in the Union.
“There's no point lying to ourselves, things won't be nearly as good as they used to be,” France's Europe minister Nathalie Loiseau said recently. When the UK parliament rejected Theresa May's Brexit deal, Loiseau said it  “was bad news for all parties”.
But if Brexit affects trade, it won't have the same impact throughout the region, with some departments if the Nouvelle-Aquitaine trading much more with the UK than others depending on the local delicacies produced in each area.
The Nouvelle-Aquitaine chamber of commerce has set up a number of meetings across the region to advise businesses on specific matters that will arise if the UK crashes out of the EU without a deal.

Some of these businesses concerns include how their products will be taxed, if there will be bans or restrictions on their goods, and what paperwork will have to be filled in.
Many businesses, especially winemakers around Bordeaux are most worried about the possible consequences of a weaker pound.
If the pound continues to fall after Brexit, British goods will become cheaper and more competitive which in turn could make French goods less competitive. Photo: Georges Gobet, AFP
“The impact on currency is more important than Brexit itself. If there's no deal, the pound will fall, and our wines will become less competitive,” Bordeaux wine expert Jérémy Cukierman told Le Point.
If the pound keeps falling, winemakers could face stiff competition from cheap wines in neighbouring Italy, Spain and further afield Australia, New Zealand or South Africa.
Another uncertainty is the question of standards – which until now are harmonized across the EU – which could also change, adding extra costs for businesses who would have to adapt their goods to new UK standards.
“The consequences of Brexit are multiple. The reinstatement of a border will hinder free movement of goods and people,” Natalia Richardson, from the Nouvelle-Aquitaine chamber of commerce told businesses at a Brexit meeting this week. “Border controls will increase paperwork and delivery times. This will also delay payments and will have a financial and personal cost.”
Nationally, the French government has released a series of recommendations to help French businesses cope with Brexit. For now as the prospect of a no-deal creeps closer, businesses are just having to wait and see.