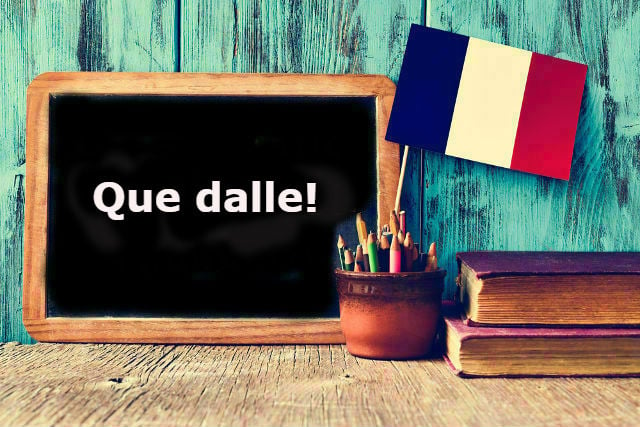 Photo: Depositphotos
Why do I need to know que dalle?
You'll hear it all the time and unless you know what it means, it could be very confusing as the expression has nothing to do with the French word dalle meaning 'slab' (as in a slab of stone).
But once you know what que dalle means, you'll find using it very straightforward and it's an easy way to make your spoken French sound native.
What does it mean?
Que dalle is a French noun meaning 'nothing', 'very little' or 'not very much'. You can use it literally to mean 'nothing' or 'none', or in a more figurative way to mean a very small amount of something as in 'pittance' or 'peanuts'.
For example:
Qu'est-ce que tu as fais ce weekend? Que dalle. – 'What did you do this weekend? Nothing.'
Quelles sont tes perspectives de boulot? Que dalle. – 'What are your job prospects? I have none.'
Combien as couté ton repas? Que dalle. – 'How much did your meal cost? Peanuts.'
Where does it come from?
Que dalle has interesting origins. The expression is widely thought to come from the romani (the language spoken by Roma people) word 'dail' meaning nothing at all.
Surprisingly, a few dozen romani words have weaved their way into French slang, but out of them all, que dalle is by far the most commonly used.
Some more examples:
Ton travail est bien payé? Non, que dalle – 'Is your work well paid? No, it pays very little.'
J'ai compris que dalle à son discours! – 'I didn't understand anything about his speech!'
Elles s'attendaient à un gros changement, mais finalement, il n'y a eu que dalle.  – 'They were expecting a big change, but in the end, nothing happened.'
For more French Expressions and French Words of the Day you can CLICK HERE to see our full list.