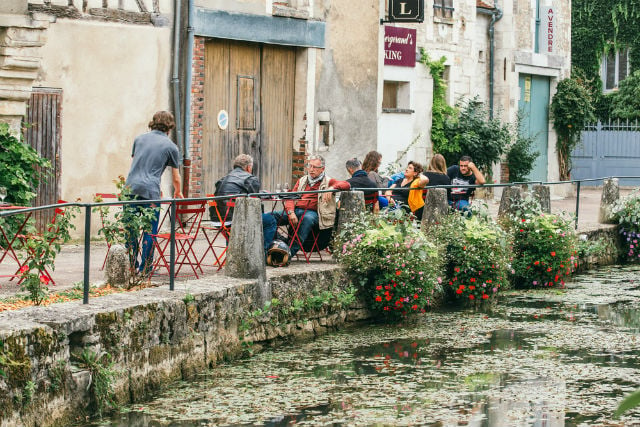 Photo: Alexshyripa/Depositphotos
The fate of Britons in France is well and truly up in the air, with the prospect of Britain leaving the EU without a deal looking increasingly likely.
So, with Brexit looming and nobody as yet quite sure what it will mean for Britons decamping to the other side of the Channel, those who were planning to move to start their new lives in France are facing a real quandary.
Do they go as soon as possible in order to get in the door before any extra post-Brexit obstacles are placed in their way or wait until they know what the move involves and at least how expensive it will be given the sensitivity of the pound against the euro?
Different people are choosing different options.
“We won't do anything until we know what's happening,” Rachel and Robert Wheeldon, both 55, who live on the Kent coast, told The Local.
The couple who said that they would like to retire in France said that certain major factors, such as healthcare and the value of the pound were making the decision harder.
“We're at a time in our lives when we need to think about making sure we have access to healthcare so we want to wait and find out what will happen with the situation over reciprocal health cover,” said Rachel.
READ ALSO: At the moment British nationals who retire to the EU have their healthcare covered by the NHS under the S1 scheme.
That would continue under Theresa May's deal with Brussels for anyone who moved from the UK to the EU before the end of the December 2020 when the so-called transition period ends.
But in the event of a no-deal Brexit France has said it would guarantee healthcare rights for two years, after which a future bilateral agreement between the UK and France is likely to come into place. Franc's guarantee also depends on the UK offering French nationals the same cover.
When it comes to residency rights, in the event of a deal movers will have until the end of December 2020 to establish themselves as legally resident in France – in other words to prove they have “sufficient resources” not to be a burden on the state – which all Britons including those who are here now will have to do.
In the event of a no-deal Brexit France and the UK may yet come to a bilateral agreement at some stage but at the moment things will be more complicated for those making the move.
The current rules mean you would need to apply to the French Consulate in the UK for a long stay visa before you arrive in France and once you get here you would have two months to apply for a titre de séjour for third country nationals.
“This is not impossible but the conditions are tighter than they are at the moment and it's a much more complex procedure,” said Kalba Meadows, citizens' rights coordinator of the group Remain in France Together.
“We're seeing really large numbers of people moving heaven and earth to get a legal foothold in France before Brexit day. We've been advising on this for over a year, but it's only now I think that people are beginning to take on the real possibility of no deal,” she added. Kalba also pointed out that people trying to arrive before March 30th will need to prove that they are legally resident no just that they have somewhere to live.
“It's worth mentioning too that people still thinking of trying to arrive before March 30th need to make sure that they can prove that they're legally resident on that date – it's not enough just to have a foot on the soil, even if you already own your own home,” she said.
“You need to meet all the conditions for legal residence as an EU citizen – so for example if you're retired or not economically active, you need to have 'sufficient resources' to support yourself so that you're not a burden on the state.”
Meanwhile if you're setting up a business you need to show that it is 'genuine and effective'.
In other words there are plenty of uncertainties that will play on the minds of movers.
For more information on what you need to know about moving to France and Brexit CLICK HERE.
Falling pound makes move more expensive
For Rachel and Robert Wheeldon, who have adult children in the UK, it's also important to know how hard it would be crossing the border once the UK divorce from the EU takes place before settling in France.
“Another factor us that the kind of property we can afford has changed since the pound dropped and made it harder for us to find what we're looking for,” said Robert.
Another couple, Alison and Peter Lackey, from Winchester, have been looking to buy in La Chartre-sur-le-Loir but Peter also said the effect Brexit has had on the currency was making him more cautious.
“When we were first looking our money would have gone a lot further. We'd see beautiful houses in our price range that we could never dream of buying in the UK but I'm feeling more wary now.” Philip Donnelly and Cherry Stone from London said that the lack of clarity from the government was making them more wary about moving forward.
“If the message from the politicians was consistent, we would be more likely to go ahead and buy something,” said Philip.
“You have to be cautious. There's too much vagueness and opaqueness from the people in charge to feel confident.”
However not everyone expressed worry over moving to France in the middle of the confusion over Brexit.
“You've either got the motivation or you haven't and the same goes for money, you've either got it or you haven't,” said one person we spoke to at the France Show in London earlier this year.
Sedaka Charles, 54, works in advertising in London, also said Brexit was not a factor in his move to France but that this was probably down to the fact he was working on a three-year plan to settle in Montpellier and was “hoping it would all be sorted by then.”
“I'm not going to be put off following my dream. Even though the situation is confusing at the moment, I feel like we'll be able to figure out a way to make it happen,” he said.
There have been various reports from estate agents who specialise in helping Britons find properties in France, with some saying that there has been a rush on Brits buying cheap homes just to have a foothold here while others have said interest has dried up during the chaos over Brexit.
Advice for Britons hoping to move to France has varied however Jason Porter, business development director at Blevins Franks, which provides financial planning advice for UK nationals abroad, said: “It is the time to get over to France because it will probably be easier now than after new regulations come into effect.”
READ THIS to find out what experts think you should be considering when planning the move to France right now.