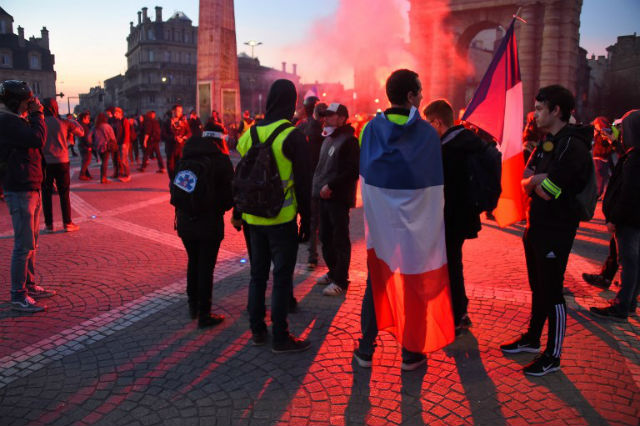 Demonstrating for the 14th consecutive weekend, 41,500 people turned out across the country, according to the interior ministry, well down on the 282,000 peak during the protests' early weeks.

“We are 15,000, that means the movement is increasing,” Jerome Rodrigues, one of the movement's better known figures, told AFP at the Paris march.

Rodrigues, along with three other people, is suing the police after being struck in the eye by a projectile he says was fired from a police Defensive Ball Launcher (LBD).

On Thursday, deputies in the European Parliament passed a resolution condemning the disproportionate use of force against protesters, after a debate about the use of the controversial weapon by French police.

The same day, a group of UN experts condemned what they said was the disproportionate use of force by police in response to violent demonstrators.

Slipping in the polls

During the course of the protests, people marched down the Champs-Elysees and crossed the river Seine to Paris's up-market Left Bank district, shouting anti-police slogans.

Marion, a nurse marching in Paris, told AFP that Macron's “great national debate” — a series of town hall meetings launched in January to try to address the grievances of the yellow vest movement — was nothing but a distraction.

“We don't believe in it, we won't take part in it,” she said. But a poll of 1,001 people published by Elabe on Wednesday suggested for the first time that most people (56 percent) would like the protests to end, even if a majority (58 percent) still support what the movement stands for.

Back to the roundabouts

This weekend, demonstrators in some parts of the country returned to a tactic adopted in the early weeks of the protests, occupying key roundabouts to control the traffic.

In the southwest, 58-year-old Joelle, who with around 30 other people occupied a roundabout on the outskirts of Toulouse, explained: “We came back to the roundabouts to avoid the violence that's happened up there (in the city centre).”

Toulouse, which has seen some of the largest protests outside the capital, has also been the scene of clashes between police and protesters.

Thousands marched there again Saturday and there was a strong turnout in the southwest city of Bordeaux, another stronghold of the movement.

There were clashes and arrests in several cities and police in Paris detained 15 of 26 arrested, but the violence appeared down from last weekend.

What started out three months ago as a protest against rising fuel taxes quickly evolved into a wider opposition to Macron's style of government and policies.

Macron, under pressure from the movement reversed the fuel tax rises in December.

But he has not bowed to another of their key demands: that he reinstate a wealth tax he repealed to encourage the rich to stay in France and invest in the country.