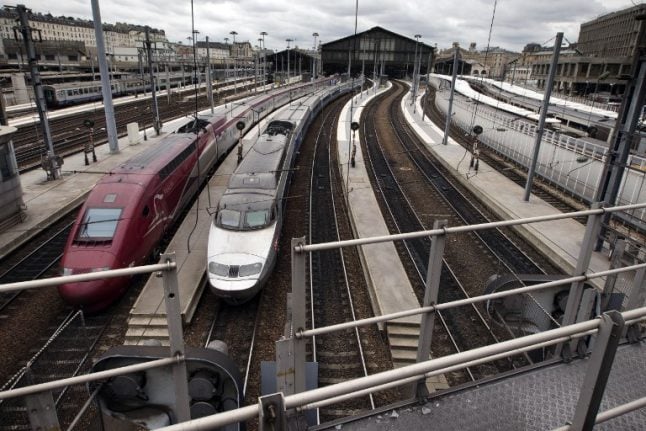 Photo: AFP
The bomb was discovered on February 4 on a construction site close to the Paris ring road, near the Porte de la Chapelle, in the north of the capital. Specialists moved the bomb from its original site Sunday morning and destroyed it in a controlled explosion in a seven metre deep well dug nearby.

Trains in and out of the Gare du Nord, the Paris station where the Eurostar trains arrive from Britain, were severely restricted, and part of the A1 motorway and the ring road were closed.
The whole of Porte de la Chapelle district in the north of the French capital was evacuated while the controlled explosion was carried out.
Bomb-disposal experts at first  failed to neutralize the bomb after it was found on February 4th on a construction site in the area.
The operation affected an estimated 1,600 residents, employees and shopkeepers at Porte de la Chapelle and 300 in Saint-Denis, a town in the northern suburbs of Paris.
On top of that services at Gare du Nord, including Eurostar trains were affected, with just one in every two journeys to go ahead as planned.
“As a result of this operation we have had to substantially revise our plan for Sunday and will be running a modified timetable. This includes the cancellation of five services and the rerouting of one service to Marne-la-Vallée,” said Eurostar in a statement.

We will be running a reduced number of trains until Sunday 17th February inclusive. If you are due to travel between today and Sunday, we recommend postponing your journey.

France's national rail service  also announced that services would be interrupted from 9 am and 3 pm on the Transilien commuter trains on lines H and K, as well as RER B, which serves Charles de Gaulle airport and RER D.
There was just one TGV North service out of two operating and eight Thalys trains out of nine were modified or cancelled and Porte de la Chapelle station on line 12 of the Paris Metro was also at a standstill.
TER trains operating in the Hauts-de-France region travelling to and from Paris were also cancelled.
When it came to the roads, the A1 motorway was closed from Porte de Paris to Porte de la Chapelle from 7 am to 3 pm as was the ring road at Porte de Clignancourt to Porte d'Aubervilliers.
Despite the fact that 2,000 bombs were dropped on the greater Paris region of Ile-de-France in April 1944, “finding one in the French capital itself is extremely rare,” Christophe Pezron, the head of the police bomb-disposal unit, told the French press.
The last discovery in the capital was made 16 years ago back in 2003 at the bottom of the river Seine, said Pezron.
However it is more common to find them in Seine-Saint-Denis department to the north of Paris.