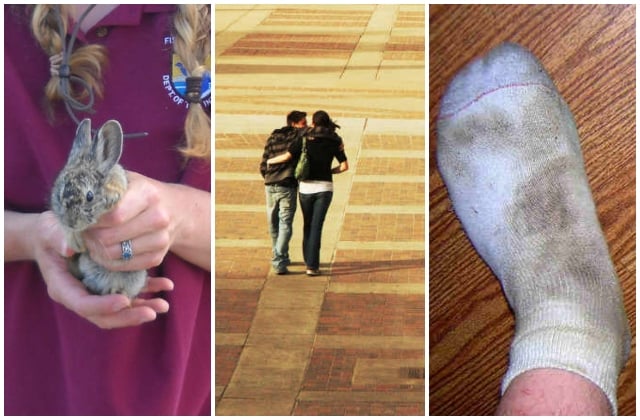 Understanding the linguistic subtleties of dating in your own language can be tricky enough – let alone in a foreign tongue.

How do you say you want to “go Dutch” in France when the bill arrives at a fancy restaurant?

From “lightning bolts”, to “placing rabbits” and “dropping old socks” there are some great idiomatic French phrases for dating just itching to be used on Valentine's Day. Can you think of any more? Let us know in the comments section below.

Lightning bolts can be lethal, of course. But in France “un coup de foudre” also means “love at first sight”. Got a blind date planned for Valentine's Day? Let's hope you both get struck by the lightning of love. This is of course only to be used if everything goes really well on Valentine's Day.

Literally “an up in the air legs match” or a little more accurately – “to play a session of legs in the air”, this commonly used expression has been around for a long time and for want of a better term, can be translated as “to have a bonk”. “Tout ce qui l’interesse c’est une partie de jambes en l’air” is a term that perhaps foreign women in France may have had cause to use before. “All he’s interested in is getting his leg over”… Don't be fooled by this one: it has nothing to do with cute furry mammals. But if your date doesn't show up, then you might say: “Il/elle m'a posé un lapin!” Confusingly, this translates literally as “to put a rabbit down”, but simply means “to stand someone up”. Another worst-case scenario here that is every bit as unappetizing as it sounds. With the literal meaning of “to be dropped like an old sock”, this idiom is the more blunt equivalent of “to get dumped”. A similar English idiom might be “to be tossed out like an old shoe”. One minute, she's telling you “Tu es l'amour de ma vie!” (You're the love of my life) and the next, she's ignoring your phone calls. You might say, “Elle joue le chaud et le froid”, similar to the English “She's blowing hot and cold”. In Anglo countries, a “French kiss” may involve a little more saliva than usual. But, in France, the so-called home of tongue-kissing, the phrase is meaningless. The nearest French equivalent is “se rouler des pelles/patins”, which translates literally as “rolling shovels/skates”. Last year France rectified the anomally and came up with the new word “gallocher” for kissing with tongues. Your teenage daughter is about to leave the house dressed to the nines for a first date. “Ne va pas les allumer!” you warn her as she slams the front door. (Literally: Don’t go lighting them up!) What is means, roughly, is, “Be sensible”, “Don't get Fresh”, or just “Keep your clothes ON!” You're at a fancy restaurant; as the bill arrives, you both scramble for your wallets. In French, you try to suggest that you “go Dutch”, or “split the bill”, but this is greeted with a blank stare. The correct French equivalent is “faire moitié-moitié”, literally “half-and-half”. There's a metre of table separating you from your beloved at a romantic restaurant, but you feel the need to make your feelings known. Why not engage in a game of footsie or “faire du pied à quelqu'un”? If all goes well, this expression – which translates literally as “to put the noose around your neck” – might be the last one you'll need. But, no, it has nothing to do with death. While the English prefer the more uplifting expression to describe marriage – “to tie the knot” – the French take a more dim view of the institution, it would seem.