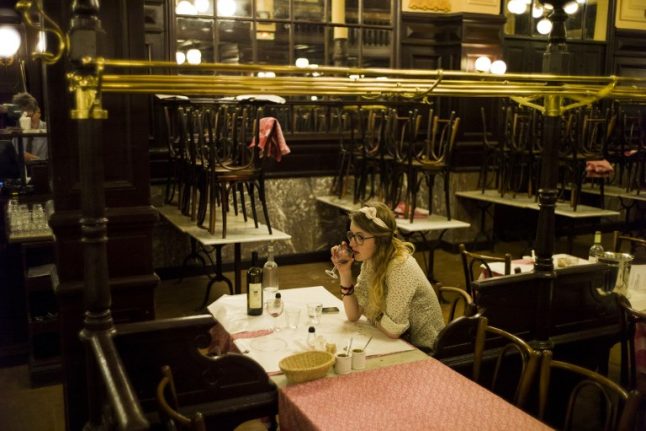 Photo: AFP
The French are drinking less and less wine, with consumption dropping by 20 percent in 20 years, while the Americans are putting away a whopping 53 percent more, new statistics reveal.
Wine consumption in France fell to 27 million hectolitres in 2017, representing a decrease of 21.7 percent compared to 2000 when the French guzzled 34.5 million hectolitres, according to statistics from the International Organisation of Wine (OIV).
Meanwhile American consumption has shot up by 53 percent in that time, making the country the world's largest in terms of overall wine consumption.
A total of 32.6 million hectolitres was consumed in the US in 2017 compared to 21.2 million in 2000.
READ ALSO: However when it comes to per capita consumption, Americans drink much less than people from certain European countries, including France, Portugal, Germany and Spain.
On average each French adult put away 51.2 litres of wine in 2016 while Americans consumed just 12.1 litres.
Meanwhile Italians consumed 43.6 litres that year while the Germans put away 28.3 litres and the Spaniards drank 24.1 litres.
Per capita Portugal is at the top of the world rankings, with the Portuguese drinking down 51.4 litres of wine in 2016 (compared to 53.2 litres in 2000).
According to the OIV, the statistics were calculated by dividing a country's total wine consumption by the number of adults living there, and excluding tourist consumption.
“France is on a long-term trend of declining consumption of all alcoholic beverages,” said Alexis Capitan, general manager of responsible drinking association In Moderation, adding that consumers are focusing on quality rather than quantity.
The annual budget for the purchase of alcoholic beverages in France however has remained stable, coming in at €325.30 in 2017, only €4.80 less than in 2016, but €24 more than ten years ago, according to a study by market research company Kantar Worldpanel.