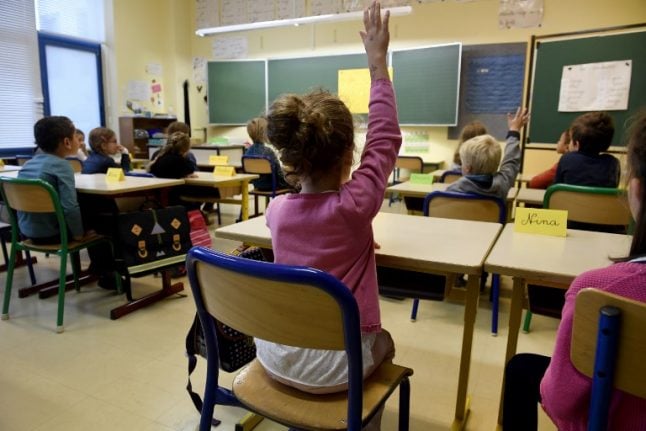 Photo: AFP
France's much-debated new education reform bill was presented to parliament this week.
Dubbed the law for bringing 'trust back into schools' (in French l'école de confiance'), the bill was presented by France's education minister Jean-Michel Blanquer in the hope it will lead to greater social justice and improve the overall academic level of students.
The proposed reforms are part of a much wider set of changes to the French education driven by Emmanuel Macron who made improving education one of his top campaign promises.
Some measures have already been been rolled out including smaller classroom sizes in the first year of primary school, a shake-up in university admissions and a ban of mobile phones in most classes. Here are the key elements of the new education reforms being debated this week.
Compulsory school from age 3
The government wants to make school obligatory for all children from the age of three. Currently in France, children only have to attend school from the age of six, when primary school (École élémentaire) begins. In reality most children however (98.9 percent) also attend nursery (maternelle) for three years beforehand, leading critics to say this reform is merely a symbolic one.
Teachers to have a duty to be 'exemplary'
The bill wants to enshrine the notion that teachers have a duty to be exemplary models for their pupils.
Critics fear this could curtail freedom of expression however the government responded to this critique by adding that this duty would apply in the context of a current law that guarantees civil servants freedom of opinion.
A new body to rate the school system
The government wants to create a new body to rate the French education system.
The new 'Conseil d'évaluation de l'école' would take over some of the tasks currently undertaken by an independent council called Cnesco, which was set up by Macron's predecessor, Francois Hollande.
The new body would be made up of 14 members mostly appointed by the government. Unions and others have voiced worries that this means the council won't be independent.
More room for experimenting
The French school system is sometimes criticised for being rigid and centralised. The government wants to give more independence to schools by allowing individual establishments to decide on certain aspects of education, such as school hours.
Extra training for teaching staff
The government wants to boost training for teachers and intends to create a new institute to do this. To bridge current regional disparities in the quality of teacher training, the heads of these establishments would be appointed by the government and not locally.
The bill also aims to increase the number of international state schools and allowing assistants who are training to be teachers to teach some classes.