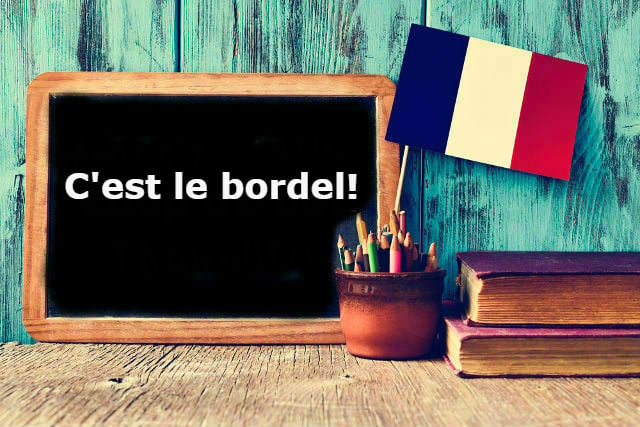 Why do I need to know C'est le bordel?
You'll hear it in the street, at home, everywhere, grumbled, shouted, or uttered emphatically with a shaking of the head. Once you know how to use it, you'll really sound like a local.
So, what exactly does it mean?
Literally, c'est le bordel means 'it's a brothel', but this expression is commonly used in spoken French to express annoyance against something or a situation that's untidy, messy or chaotic, both literally and figuratively as in  'what a bloody mess!' or 'it's mayhem!' or 'what a disaster!'.
When it's not used in its literal sense to describe a brothel, bordel is used in French as a swear word on its own (bordel!) or in combination with other swear words as in bordel de merde!
C'est le bordel can be used for a range of negative situations. For example, a chaotic situation as in: Depuis que le patron est parti, c'est le bordel (since the boss left, work is a disaster!').
It can also describe any kind of disorderly situation, as in a traffic jam: C'est le bordel sur l'autoroute avec toute la circulation! (It's chaos on the motorway with all the traffic!).
Where does it come from?
Some sources say the expression dates back from the late 19th century, after the Franco-Prussian war when brothels lined the streets of Paris and other French towns to describe the lively and chaotic atmosphere in and around those establishments at the time.
During the Second World War, it became more widely used to describe a chaotic situation and this is how it continues to be used today.
Examples
Ta chambre, c'est le bordel !
Your room is a tip!
Quand le prof n'est pas là, c'est le bordel !
When the teacher's not there, it's mayhem!
Le feux rouge est en panne, c'est le bordel !
The traffic light's broken, it's chaos!