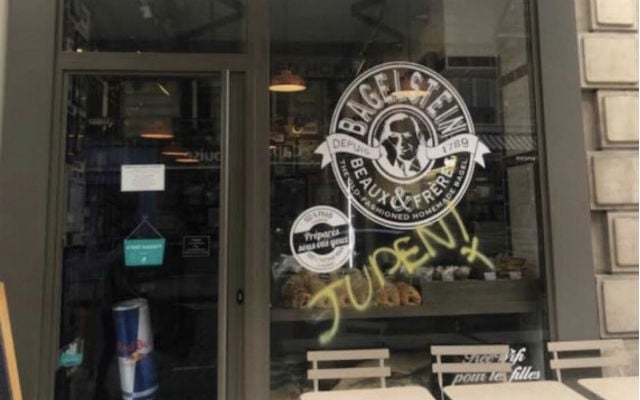 Photo: LICRA/Twitter
An investigation has been opened into anti-Semitic graffiti which appeared on the front of a bagel restaurant in central Paris at the weekend.
The word 'Juden' (Jews in German) was sprayed in yellow on the front window of a restaurant belonging to the Balgestein chain on the touristy Ile Saint-Louis.

Photos were posted on the internet, with the government and many commentators expressing their outrage.
“The most crass type of anti-Semistism in the streets of the City of Light. We must never give in, ever,” government spokesman Benjamin Griveaux tweeted.

Some on social media questioned whether there was a link between the graffiti and the 'yellow vests', who were staging a protest in the capital that day.
However, the restaurant owners have said the protesters had nothing to do with it as the incident probably occurred several hours before the protests began.
The Bagelstein chain has filed a complaint and an investigation into incitement of hatred and degradation of public property has been opened.