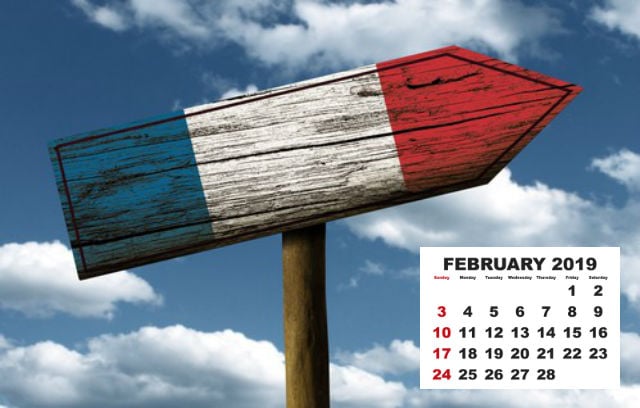 French President Emmanuel Macron is set to receive the heads of the country's most important agricultural unions on Monday as part of his national consultation (Grand Débat).

The debate was launched in January in the hope of quelling months of anti-government unrest on the streets.

French Minister of Education Jean-Michel Blanquer will present his new bill aimed at “generally raising the education level of students” in France and “promoting social justice”.

The Bank of France is set to present its first economic growth estimate for the first three months of 2019. Manchester United will play PSG in the Champions League at Old Trafford on Tuesday night.

French Health Minister Agnes Buzyn will present her health bill to the country's Council of Ministers on Wednesday.

Wednesday marks the beginning of the trial of ex-professional boxer Christophe Dettinger for violence towards two police officers during the 'yellow vest' demonstrations in Paris.

Dettinger was caught in a viral video fighting French riot police with his fists during skirmishes on a bridge in the French capital. The former coach of the French national rugby team Guy Noves will appeal his firing which happened back in December 2017.

The official unemployment figures for the last quarter of 2018 will be published on Thursday.

The trial of controversial 'yellow vest' leader Eric Drouet is set to begin on Friday after he was accused of organising a demonstration without seeking permission beforehand.

Launched in 1999, this event brings in over 400 artists from around the world and features contests, concerts, food and professional tattoo accessories. This year's theme is the “King of Cinema”.
From the 16th of February to the 2nd of March, the Nice Carnival will celebrate the 100th anniversary of Victorine Studios, “the Mecca of the film industry on the Côte d'Azur”, which since 1919 has been associated with such silver screen luminaries as Marcel Carné, Roger Vadim, François Truffaut, Jean Cocteau, Jacques Demy, Alfred Hitchcock, Woody Allen and many other talented directors.
Fete Du Citron, Menton, February 16th – March 3rd
It might sound a little kooky, but the Lemon Festival in Menton is becoming one of France's biggest festivals, attracting more than 160,000 visitors each year. Visitors are treated to a visual feast of floats, decorations and 10 metre tall designs that together require over a stunning 140 tonnes of citrus fruits to be made. Check out the different exhibits, attend parades during the day or night, and browse a market selling local products. Photo: AFP
Sunday February 17th
The famous Chinese New Year parade that takes place in the 13th arrondissement of the French capital will take place on Sunday.
So if you haven't celebrated the beginning of the Year of the Pig yet, this is your chance.