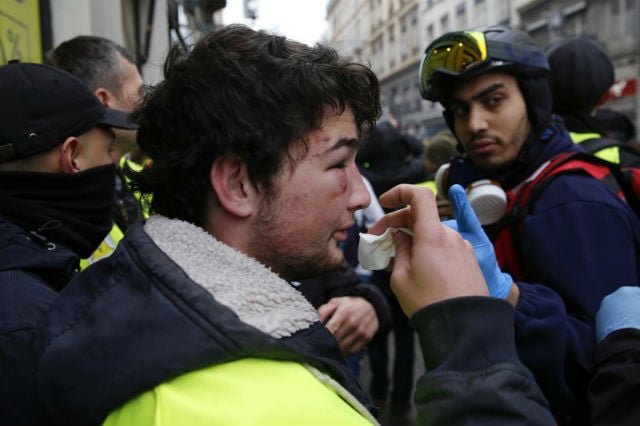 A yellow vest protestor in Lyon on Saturday, not to our knowledge involved in the street fight. Photo: Alex Martin/AFP
The French internet publication Lies Breaker posted a video shot from above showing the two groups taunting each other, throwing bangers and other objects, and then joining together in conflict.

It was uncertain which side was which, or what was behind the conflict. The video had already been watched 670,000 times by Sunday morning.
The confrontation was also captured by other citizen journalists. Damien Rieu, who describes himself on his Twitter account as a “whistleblower” and whose feed criticises Islamist groups, posted a mobile phone footage of the confrontation shot through a shop window.
“I’ve never seen this in my life. It’s a civil war,” someone, perhaps Rieu, exclaims. “It’s serious. It’s a sadness.”

Some commentators on Twitter argued that it was inevitable that there would be fractures in the unlikely coalition that makes up the protest movement, which has the blessing of both Marine Le Pen, leader of the far-right National Rally party and Jean-Luc Mélénchon, leader of the far-left La France Insoumise movement.

As inevitable as night following day.

PROTESTS
What happened to the rioters who trashed the Arc de Triomphe during yellow vest violence?
Url copied to clipboard!