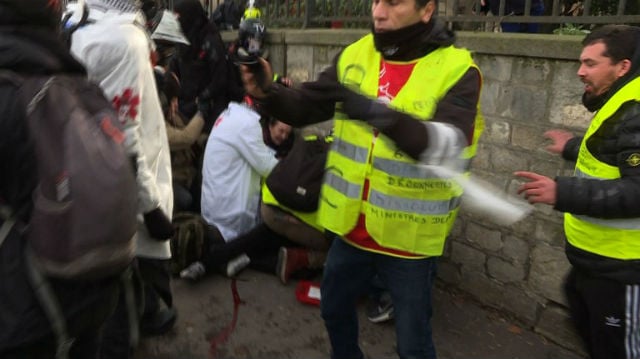 Street-medics helping a 'yellow vest' demonstrator after he lost his hand during clashes n Paris. Photo: Claire ROBICHE, Frédéric JEAMMES / AFPTV / AFP
Despite a drop in numbers from the massive turnouts of the first demonstrations in November, tens of thousands still turned out in cities across the country to protest against French President Emmanuel Macron's policies.
Clashes broke out outside the National Assembly building in Paris after a march from the Champs-Elysées arrived there. While many demonstrators marched peacefully, some masked activists tried to break down barriers outside the parliament while others urinated outside. Masked men threw projectiles at police, who responded with tear gas and stun grenades.
As the march continued, vandals burned rubbish bins as well as cars — mainly luxury models — vandalising bus shelters, cash machines and shop windows along the route.
One of the torched cars belonged to Sentinelle, France's anti-terrorism unit. Interior Minister Christophe Castaner expressed his “indignation and disgust” in a tweet..

Volunteer medics at the National Assembly told AFP that a man had had his hand ripped off during the clashes between police and protesters. One witness who filmed the incident, 21-year-old Cyprien Royer, said it had been caused by a flash-ball grenade fired by police to disperse the crowd.
Royer said the victim was a yellow jacket photographer “taking photos of people trying to break down the barriers protecting the entrance to the National Assembly”, at around midday.
“When the cops went to disperse people, he got hit by a flash-ball grenade in the calf,” he added. “He wanted to bat it away so it didn't explode by his leg and it went off when he touched it.
“We put him to one side and called the street medics. It wasn't pretty: he was screaming with pain, he had no fingers — he didn't have much above the wrist,” he said.
Paris police said the man had lost four fingers. By early evening, officers in Paris said they had arrested 36 people and 16 were being held in custody, they added.
Disputed turnout
“We mustn't give up,” said pensioner Serge Mairesse, from Aubervilliers, just outside Paris. This was the 11th time he had marched with the movement, he told AFP.
“We have to win to have more social and fiscal justice in this country,” said Mairesse, who was carrying a placard calling for the reimposition of a wealth tax on high earners repealed by Macron.
'Yellow vest” protestors pose in front of the Eiffel Tower in Paris on Saturday. Photo: Thomas Samson/AFP
At the march in the southeast city of Lyon, Benard, a 56-year-old computer technician expressed scepticism about Macron's “great debate” initiative designed to address people's grievances.
“It's all very good, the great debate, but we want something concrete: fewer taxes, more purchasing power. We'll be here every Saturday of the year if we have to.”
Thousands more protesters turned out in the French Mediterranean ports of Marseille and Montpellier and also in Bordeaux and Toulouse in the southwest — strongholds of the movements — and in several cities in the north and west of France.
In the eastern city of Saint Etienne, eight police officers were slightly hurt during clashes with some protesters on the fringes of the march there, local police said.
Interior ministry figures put the turnout across France at 51,400, of whom 4,000 marched in Paris, slightly down on the previous week's figures.
But last week's official estimates were disputed both by march organisers and contradicted by an independent estimate carried out for news media, which gave a higher estimate.
The first yellow vest day of protest in November brought 282,000 people out on to the streets across France, according to government figures.
But a YouGov poll of 1,037 people issued on Thursday suggested that nearly two out of three people in France (64 percent) still support the movement. It was carried out on January 30 and 31.¨
French prosecutors are meanwhile investigating a series of attacks on homes belonging to politicians in Macron's Republic on the Move party, ranging from vandalism to arson.
'
No one has been hurt and no individual or group has so far been implicated in the incidents. Government and opposition politicians have condemned the attacks.