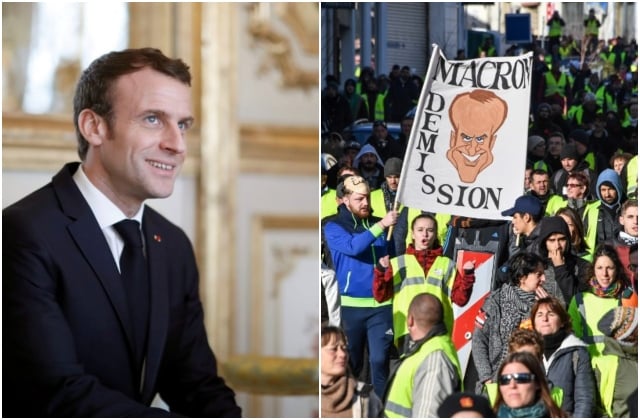 “Macron demission!” has been the cry on the streets of French cities every Saturday since November.

The Gilets Jaunes protesters have repeatedly made it clear they want the president gone.

While their protests began about fuel taxes and morphed into calls for social justice, the one thing that has united the many strands of the movement has been their personal hatred for the French president.

They see him as an arrogant leader who only cares for his rich “friends” and has little time for the man on the street. He has angered them with many a clumsy gaffe or an outspoken word in recent months.

But it's not just the yellow vests who have grown unhappy with Macron. In truth the president has been slipping in the polls ever since his brief honeymoon period came to an end shortly after being elected.

He went from newly elected president to “most unpopular” French head of state ever, according to opinion polls, in record time, beating his predecessors François Hollande and Nicolas Sarkozy who also suffered the same fate.

Yet unlike his predecessors Macron has suddenly jumped back up in the popularity polls.

On Tuesday an Ifop-Fiducial survey revealed that Macron's approval ratings had jumped up 6 points since mid-January. And it's a full 11 points above his lowest approval rating of 23 percent in the December poll.

The jump may not be anything for Macron to shout about and he certainly shouldn't, given how often he sparks anger when he opens his mouth, but it's somewhat unexpected.

Political commentators in France point to a number of reasons to explain Macron's rebound.

Some point to the measures he took to ease the yellow vest crisis, such as boosting the minimum wage and cutting taxes for pensioners and overtime workers.

Others believe Macron has enjoyed other recent successes such as the country's record low number of road fatalities following his controversial speed limit cut, as well as his reform of the income tax system to “pay as you earn”, which has gone fairly smoothly. Many point to Macron's launch of his “national consultation” which has seen him debating with local mayors for several hours around the country as he tries to reconnect with the country.

There has also been a Republican backlash against the “yellow vest” rebellion which has benefitted the president. Some 14,000 people marched through Paris last month to denounce violence and show their support for democracy.

Macron is on a see-saw with 50,000 or so Gilets Jaunes. As their popularity goes down, his popularity goes up. Another six points, according to this poll. He's still pretty low but neither Hollande nor Sarko recovered from their tumble in the polls. Can Macron keep on climbing? https://t.co/08ee7Fnk7c

The Local's political columnist John Lichfield believes the boost in popularity for Macron is more a reaction against the ongoing violent protests and rioting than anything the president himself has achieved.

“The bounce in Macron’s popularity is partly a vote against chaos,” he said.

“The prosperous part of the country is worried by the excesses and the persistence of the Gilets Jaunes. His rise in popularity is also, I think, a recognition of Macron’s performances at local meetings during his Great National Debate.

“But he has to be careful not to dominate that process. Too much 'Macronsplaining' will not be good for Macron.”

Macron is certainly not out of the woods yet with 67 percent of those polled still against his economic policies and 74 percent believing he still doesn't take into account their main concerns.

With sensitive reforms to jobless benefits and the pension system in the pipeline Macron will know his ratings could easily plummet once again.