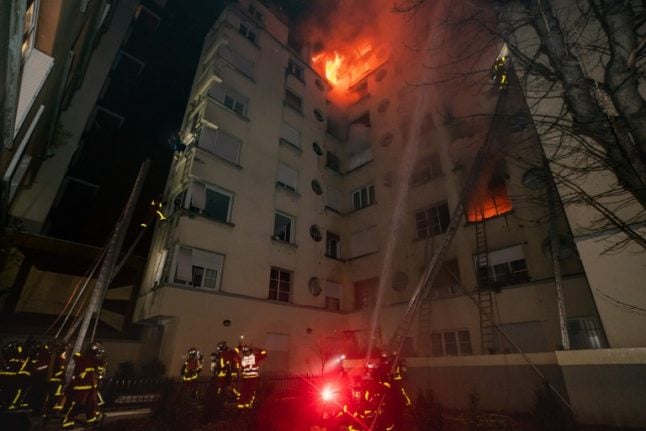 The woman in her 40s, who lived in the building, is understood to have been treated a dozen times in psychiatric facilities. In late January she was released from Sainte-Anne psychiatric hospital in Paris, sources said.

The fire on the upper floors of the building on Rue Erlanger in the upscale 16th Paris district, was the most deadly in the capital since 2005.

Thirty people were also hurt in the blaze which ravaged much of the back of the building in the early hours of Tuesday.

Some 20 firemen Wednesday continued to search through the building's blackened remains, part of which has been declared unsafe to live in.

Dramatic footage of the scene, filmed by firemen and neighbours, showed flames shooting out of windows and firemen climbing narrow ladders to rescue terrified residents, some dressed only in pyjamas, from the top of the eight-storey block.

The suspected arsonist, who was immediately detained, is currently being held in a police psychiatric facility.

She was “intoxicated when detained and attempting to set fire to a car,” police said.

The woman had already been in trouble with police, including once for causing damage by fire, but she was never convicted.

She had repeated run-ins with a neighbour, who is a fireman, and was again involved in a dispute with him just before the fire broke out, police said.

The 22-year-old neighbour told Le Parisien newspaper Tuesday that his girlfriend had asked the woman to turn down her music late on Monday, prompting a flurry of insults that led them to call the police.

A special mass of remembrance for the victims was held Wednesday at the nearby Saint-François-de-Molitor Catholic church.